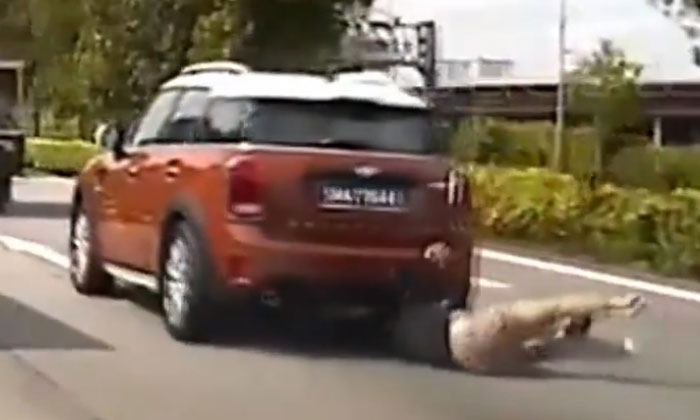 A 22-year-old motorcyclist suffered multiple injuries and was taken to hospital after he was knocked off his bike and run over by a MINI Cooper on the Central Expressway (CTE)on Monday (Sep 3).

A video of the incident was posted on ROADS.sg's Facebook page where the rider is seen skidding and falling before the MINI runs over him.

In the post, the video's contributor Ho Zi Ming said that a Toyota Vellfire was responsible for the accident.

"I witnessed this horrific accident this morning (Sep 3) at 9.55 am on CTE towards city just after exiting Ang Mo Kio Ave 1," he wrote.

"The Vellfire SLD168L is allegedly the cause of the whole accident, but he just fled the scene.

"Vellfire wanted to lane change that’s why the biker had to do an emergency brake.

"[The] biker skidded and fell and [the] MINIi SMA7164E could not avoid and went over the biker.

He added that the rider was bleeding and suffered several abrasions and injuries.

"The MINI also suffered [a] big dent on his car door," he said.

The Singapore Civil Defence Force (SCDF) told Stomp it responded to the accident at around 10am.

"A man suffered multiple injuries and was conveyed to Tan Tock Seng Hospital," a spokesman said.

A police spokesman issued the following statement to Stomp:

"On Sep 3 at 9.56am, the police were alerted to an accident involving a car and a motorcycle along the CTE towards the Ayer Rajah Expressway (AYE).

"The motorcyclist, a 22-year-old man was conscious when conveyed to Tan Tock Seng Hospital.

Related Stories
Rider, 22, taken to hospital after his motorcycle ends up under bus in accident at Jurong Town Hall Rd
Lorry driver and passenger taken to hospital after accident with tipper truck at Jalan Ahmad Ibrahim
Foodpanda rider cuts across 4 lanes... and crashes into another Foodpanda delivery guy
More About:
Accidents
motorcyclist
injured
run over
MINI Cooper