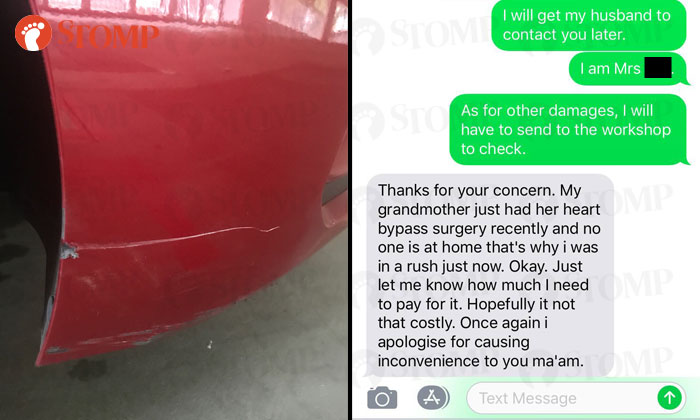 Stomper M's wife was driving along Balestier Road towards Lavender Road on May 23 when a motorcyclist hit the right side of her car, damaging it.

According to M, the rider stopped to apologise to his wife but claimed he had to rush off to see his grandmother before leaving her his phone number.

"He said that his grandmother had complained of heart pain after having a heart bypass surgery and that no one was at home," said M.

"He also told my wife that he will be responsible for all damages before riding off.

"My wife, being a nice person, didn't even take his identity card number, driver's license or bike plate number and just let him go."

M told Stomp that the red Hyundai Avante his wife was driving was new and had been bought in March.

Following the incident, the rider, who said his name is Fir, messaged M's wife to apologise for the inconvenience caused. 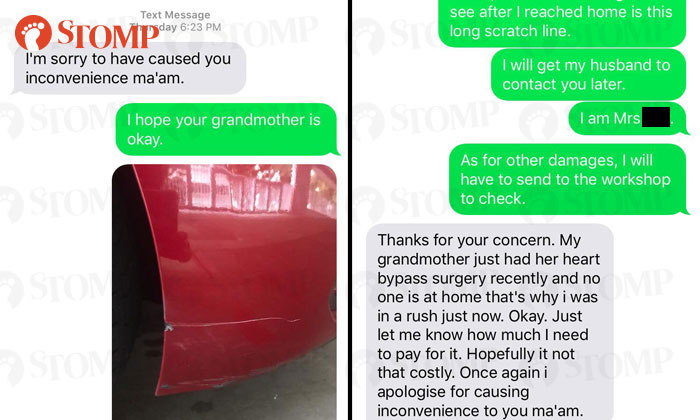 He thanked her for asking about his grandmother and told her he would pay for the damage caused.

He added: "Hopefully it [is] not that costly."

On Wednesday (May 28), M's wife updated Fir that they had sent the car to a workshop. 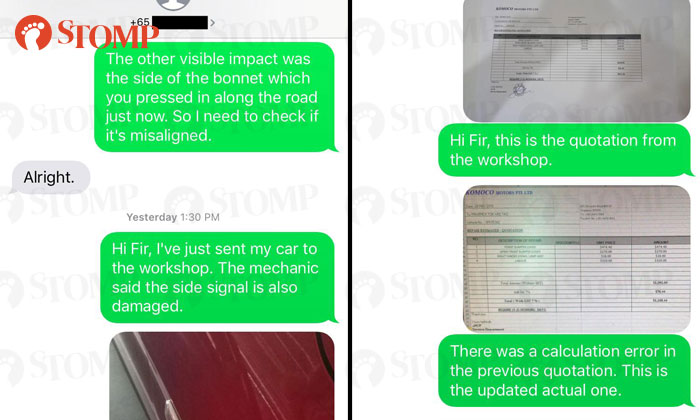 Apart from scratches and dents, a mechanic told them the car's side signal was also damaged.

She then send him a screenshot of the quotation given by the workshop which amounted to $1,100.

After multiple calls from both M and his wife, he did not pick up or reply to the messages.

M's wife expressed her disappointment after trusting him to follow through with taking responsibility for the damages. 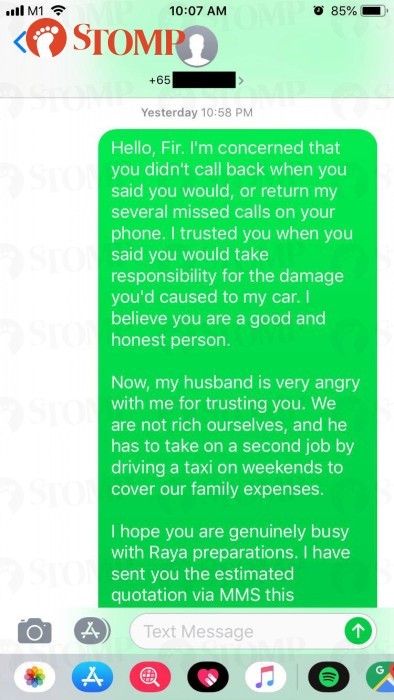 Not sure what else to do, M said he hopes by posting this on Stomp someone can help to identify the rider.

"The guy was wearing a Deliveroo T-shirt when the incident happened," he said.

Related Stories
Guy avoids returning $26k that he owes girl -- then goes MIA and blocks her
GrabHitch driver accepts booking for 5am ride -- then goes MIA because he was sleeping
Man on Carousell cancels deal and goes MIA -- then insults buyer when confronted
More About:
mia
damage
accident
motorcyclist