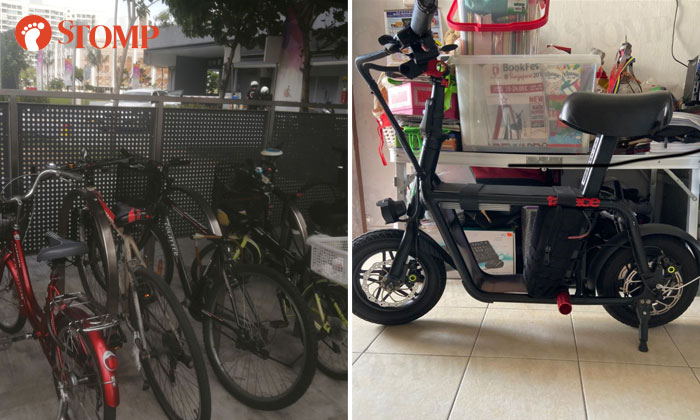 The police are investigating a case where an e-scooter went missing from a bicycle parking bay at Our Tampines Hub on Nov 17.

Stomper Nicholas, the owner of the e-scooter, alerted Stomp to the incident.

"My battery was flat so I parked it there at about 5.30pm for me to take home the next day," he said.

He told Stomp that he subsequently made a police report.

In response to a Stomp query, the police confirmed a report was lodged and police investigations are ongoing.

Nicholas is offering a $500 reward to anyone who can give him information on who took his device.

"It is a seated scooter with red footrests, a red stem in the middle of the handlebar and green brakes at the wheels," he said.

If you have any information on the e-scooter, kindly contact Stomp at stomp@stomp.com.sg or WhatsApp 9384 3761.

Related Stories
Man's $600 e-bike stolen from Potong Pasir HDB block: "I used it to travel to work"
Man who broke into Toa Payoh store and stole $1,600 worth of loot including cigarettes arrested
Police looking for woman to assist with investigations into shop theft at Compass One
More About:
e-scooter
PMDs
thief
stealing
steal
reward