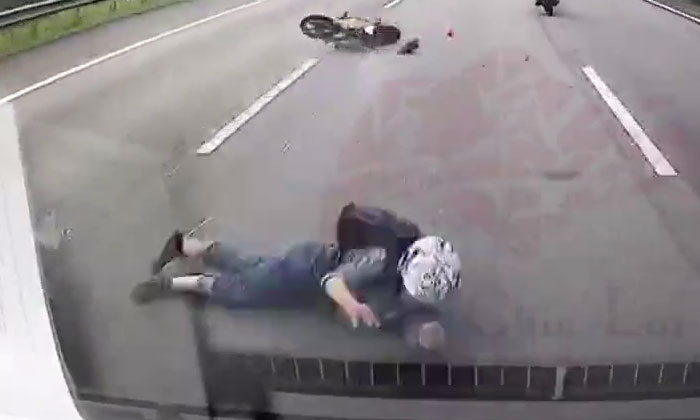 A rider was seen losing control of his motorcycle and falling onto the road before getting run over by a van.

A video of the incident was posted on Beh Chia Lor - Singapore Road's Facebook page.

According to the post, the incident was recorded from the dashboard camera of a van that was travelling along the Second Link in Malaysia.

The timestamp indicated that this occurred on Wednesday (Sep 19) at about 7.58am.

At the 00:31 mark in the video, the motorcycle appears to hit an object lying on the road that causes the bike to lift off the ground and fall to the road with the rider.

The rider is then seen rolling on the road before the oncoming van runs over him.

The van driver pulls over to the side of the highway before the video ends.

Events appeared to have happened so quickly that it did not give the van driver much reaction time to avoid the rider.

In the post, the contributor says, "Please don't blame my friend (the van driver)".

Stomper Eddie shared with Stomp another video of the accident that was taken from the dashboard camera of his friend's vehicle.