Rider, 57, killed in accident with minibus on PIE, driver arrested for careless driving 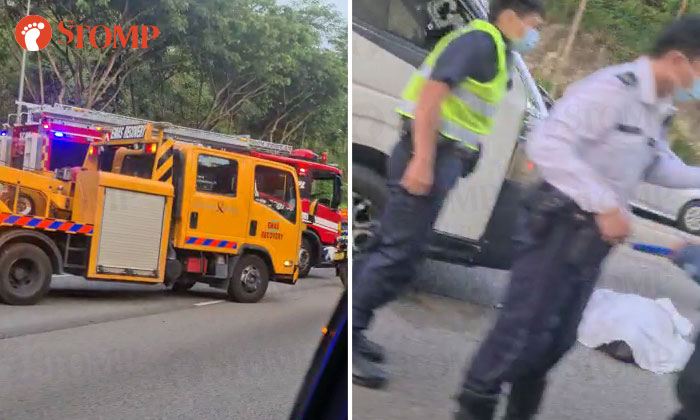 A 57-year-old motorcyclist was killed in an accident with a minibus along the Pan Island Expressway (PIE) towards Tuas, before the Bukit Timah Expressway (BKE) exit on Saturday morning (Mar 13).

The 38-year-old driver of the minibus was arrested for careless driving causing death, the police told Stomp in a statement.

Stomper Hanimanja alerted Stomp to the incident and shared a video she took as she was passing by.

In the video, police and Singapore Civil Defence Force (SCDF) vehicles and officers are at the scene.

A body is covered with a white sheet in front of a minivan.

In response to a Stomp query, the police said they were alerted to the incident at 6.43am.

"The 57-year-old male motorcyclist was pronounced dead at scene by a paramedic," a police spokesman said.

An SCDF spokesman told The Straits Times a man was trapped under the vehicle and SCDF used lifting tools to rescue him.

But he was pronounced dead at the scene.