Rider, 22, taken to hospital after his motorcycle ends up under bus in accident at Jurong Town Hall Rd 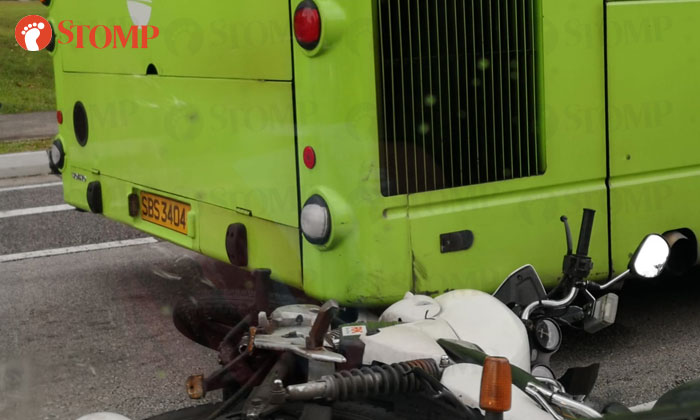 A 22-year-old man was taken to hospital after the motorcycle he was riding ended up wedged under a bus along Jurong Town Hall Road on Monday (Sep 3) morning.

Stomper Tan alerted Stomp to the incident and shared photos of the bike under the rear end of the Tower Transit bus.

"I didn't see the rider. He was probably taken to hospital as I heard the faint sound of the ambulance from afar.

She added that when she was at the scene, the bus was empty.

In response to a Stomp media query, a police spokesman said that they were alerted to the accident along Jurong Town Hall Road towards the Ayer Rajah Expressway, before Jurong East Street 11.

"The motorcyclist, a 22-year-old man was conscious when conveyed to Ng Teng Fong General Hospital," the spokesman said.