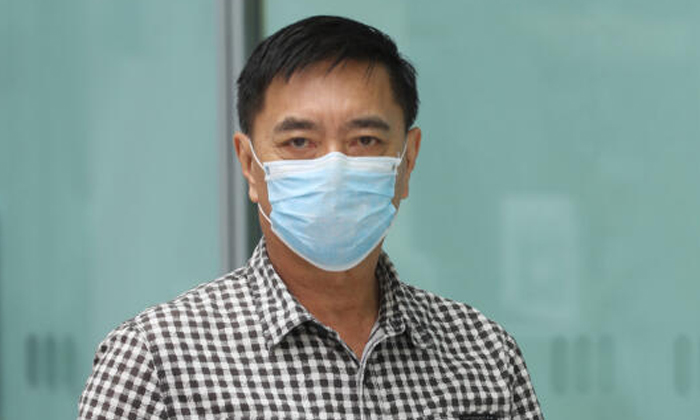 In an animated recounting of events, retired local actor-director Ng Aik Leong told the court that the Bangladeshi worker he is accused of voluntarily causing hurt had given him the "right" to "hammer him".

Ng, 59, better known as Huang Yiliang, claimed trial on Monday (July 27) to a charge of voluntarily causing hurt to one Mr Jahidul at the Singapore Islamic Hub (SIH) at around 4.20pm on Dec 11, 2018.

He allegedly attacked Mr Jahidul, a Bangladeshi who worked for him, by using a metal scraper with a wooden handle - hitting him twice in the abdomen and once on the head.

This caused an injury to Mr Jahidul's scalp, as well as an abrasion on his upper abdomen.

Ng represented himself, while Mr Jahidul was not present in court as he is currently being isolated at a foreign workers dormitory.

Mr Akhtar told the court that he was stationed at the main counter of SIH when another security officer alerted him to a commotion.

When he arrived at the SIH canteen, he saw Mr Jahidul crying out and telling him that he had been injured by his boss, Ng.

Mr Akhtar added that Ng had allegedly told Mr Jahidul he was "stupid" and "did not know how to do work".

Sgt Teo told the court that the victim had seemed "distressed" and "teary-eyed", and deeply afraid of Ng, adding that he noted at the time the multiple injuries to the victim's abdomen and head.

Meanwhile, SSgt Lim said that when he asked Ng if any assault had taken place, the former actor said no and denied that he had used the metal scraper to hit Mr Jahidul.

But he later backtracked and told SSgt Lim that a "scuffle" had occurred, involving "some pushing and pulling".

SSgt Lim said: "He also told me that the victim had allowed him to use punishment on him."

In court, Ng disputed Mr Akhtar's statement that he had told the worker he was "stupid".

Ng added that he thought Mr Jahidul was "acting" and exaggerating his injuries to make them out to be "100 times worse than they actually were".

Ng also mimed the way he thought Mr Jahidul had behaved at the scene - clutching his head in mock pain and at one point lifting his shirt to display his stomach, as he claimed he "did not see any injury" to Mr Jahidul's abdomen at the time.

He also told the court, while cross-examining SSgt Lim, that Mr Jahidul had often told him he was "a very good boss", "a good teacher".

Ng said Mr Jahidul treated him "as his father".

Ng added: "He (Mr Jahidul) gave me the right to hit him. This is what he told me, 'I allow you to hammer me because I do things so slowly.'"

He played various roles, such as a foul-tempered husband in the TV series Holland V and a gambler in the movie 12 Lotus by Singaporean film-maker Royston Tan.

Another unrelated charge of disturbing the public peace by fighting with another man, Mogana Raj Saravanan, on June 9 last year has been temporarily stood down as Ng claims trial to the first charge of voluntarily causing hurt with a weapon.

Those convicted of causing hurt with a weapon can be jailed for up to seven years and fined or caned.

Ng cannot be caned as he is over 50 years old.

Related Stories
Veteran celeb Huang Yiliang allegedly attacked man with metal scraper, hit another guy with phone
20-year-old woman who allegedly evaded taxi fare, hit elderly cabby with pizza board arrested
Survivor of BF's assault now hopes to help others: 'I put up with the abuse as I was scared to lose him'
More About:
court
celebrity
fight
assault
attack