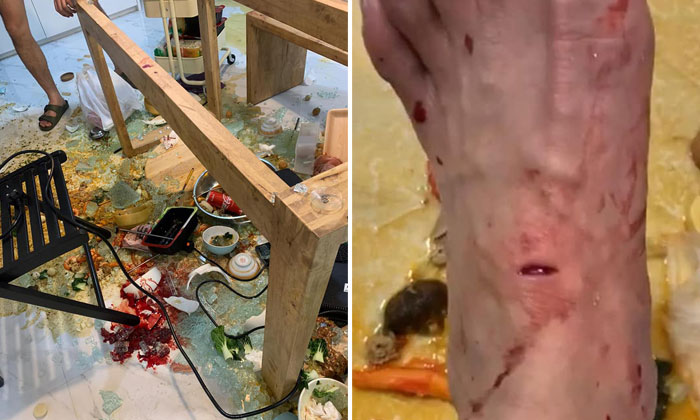 A furniture company told Stomp that hotpot equipment should not be used directly on tempered glass tables after one of its customers shared her table had "exploded" during a steamboat dinner at her home.

Facebook user Stephanie Chu said in a post that she was having dinner with her friends on Jan 19 when her dining table "exploded" and its tempered glass surface shattered into pieces.

She said that everyone sat "in shock" as glass shards and hot soup was everywhere. 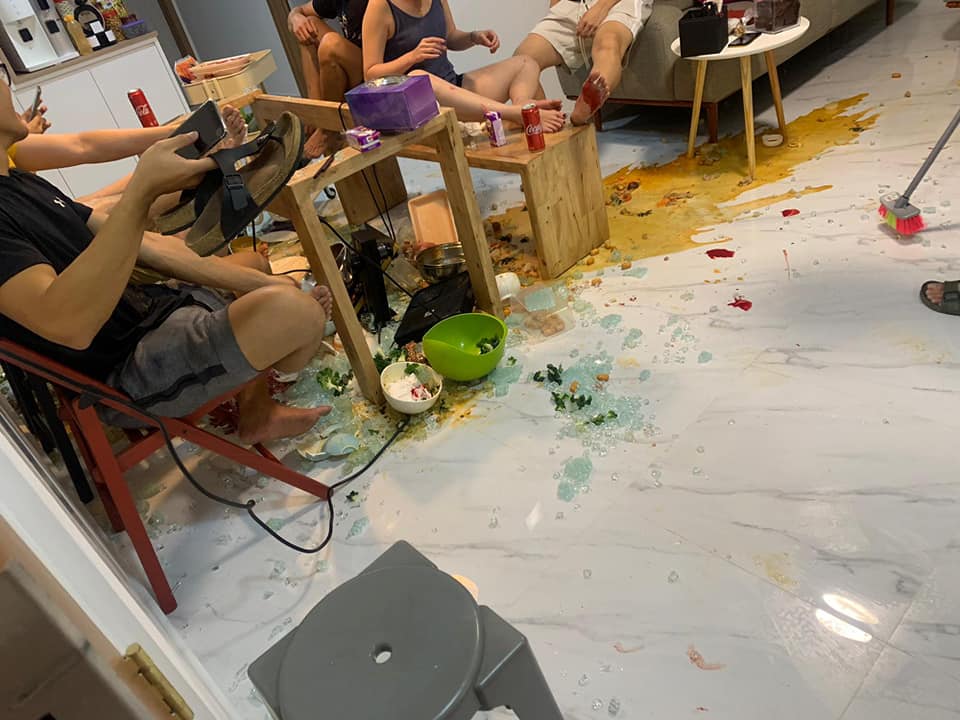 All her guests were injured with some suffering "cuts bigger than the size of an eye".

She added that she was taken to Ng Teng Fong General  Hospital (NTFGH) where she was treated for second-degree burns. 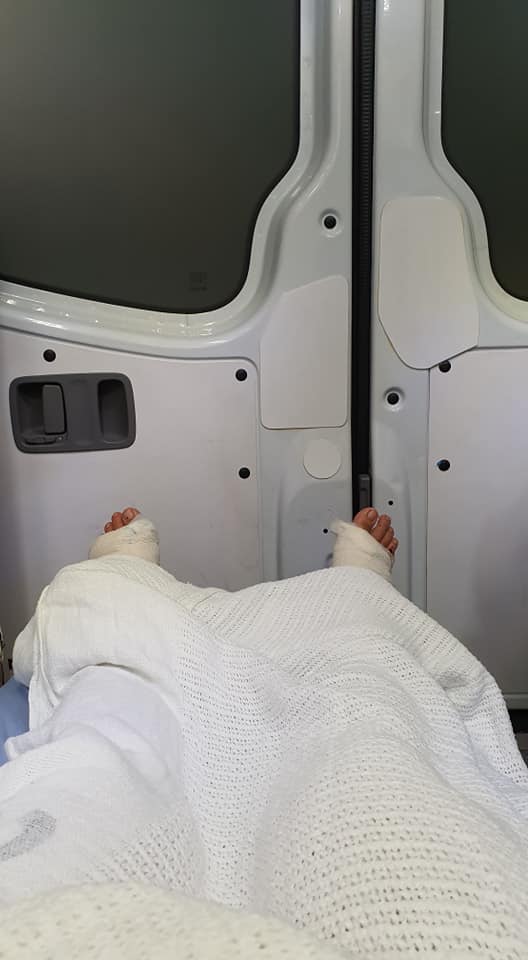 Apart from the injuries, she said her new kitchenware was damaged and there were bloodstains on her wall and sofa.

Blood had also seeped into the grout between her floor tiles and food was scattered all around.

"I understand that there is a potential possibility of thermal stress that may occur on a tempered glass even though it is supposed to be tough, with 15mm of thickness," she wrote in her post.

"It was supposed to be a joyous gathering between my friends. But it ended up being a traumatizing experience.

"I hope my story will be a warning towards all tempered glass top table owners."

She added that she had contacted Comfort Design Furniture to ask for compensation and was told they would give them a new laminated tabletop as the base of the table was still intact.

However, she said she was looking for "minimally some responsibility on the company's end... to cover the medical bills and repair costs."

"We shifted into our brand new home, with brand new furniture for the entire house, all ready to celebrate our first CNY at our new house," she wrote.

"Instead, my husband and I were left speechless with all the mess left behind. 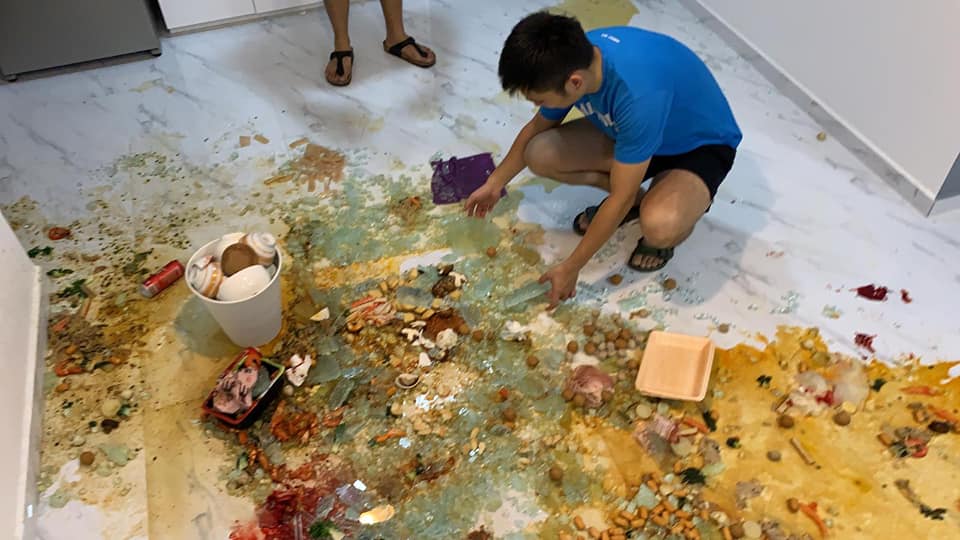 "When I came home from [NTFGH] last night, I broke down and cried when we opened the door.

"My house is in a mess and it smells like a crime scene of a murder."

She noted that at least the incident did not happen during the Chinese New Year weekend where elderly people and babies could have been severely injured.

In response to a Stomp query, a spokesman from Comfort Design told Stomp that the company is empathetic of Stephanie's situation and would like to assist them but said they believe they are not to blame for the accident as the table was not used "within its intended scope of use".

Here is their statement in full:

"Firstly, we'd like to extend our sympathy to Stephanie, her husband and their guests on the unfortunate incident that has happened.

"We were notified of the incident via a phone call yesterday, Monday 20 Jan 2020.

"Our table is made using tempered glass, which is a type of safety glass with increased strength as compared to regular, untreated glass.

"Tempered glass is considered safe because should the glass shatter, it'll break into granular chunks instead of sharp pieces which may cause cuts.

"The cuts that were seen in the pictures were, chances are, caused by the broken cutlery.

"We believe the accident was the result of inappropriate equipment being used on glass.

"When high temperature is applied to glass and the bending stresses exceed the strength of the glass, the glass may break.

"This is also known as thermal stress.

"Hotpot equipment should not be used directly on tempered glass tables as glass is a bad conductor of heat.

"Glass is not designed to withstand high temperature.

"This is the first time we've had glass shatter issues due to the use of hotpot equipment.

"However, the sum could not be agreed upon as Mr Low would like us to bear the full extent of their damage.

"Our company is empathetic of their situation and would like to assist them during this time of inconvenience, however, we would like to uphold our position where we think that our company and our product is not to be blamed for the accident as it was not used within its intended scope of use.

"Glass or tempered glass is a hard but also fragile material.

"It's been used in furniture and other household items for many years hence it's not a new material or resource.

"We'd like to educate the public that glass is not meant for use with hotpot equipment, which is the same reason why glass tables are not a choice material in hotpot restaurants.

"Moving away from hotpot equipment, we recommend that coasters (that are well designed for its intended use) or insulating materials be placed when hot cutlery/kitchen utensils are placed on tables.

"This will help protect and prolong the lifespan of the furniture."