Restaurants and bar shut for flouting Covid-19 rules, including pouring alcohol into teapot to avoid detection 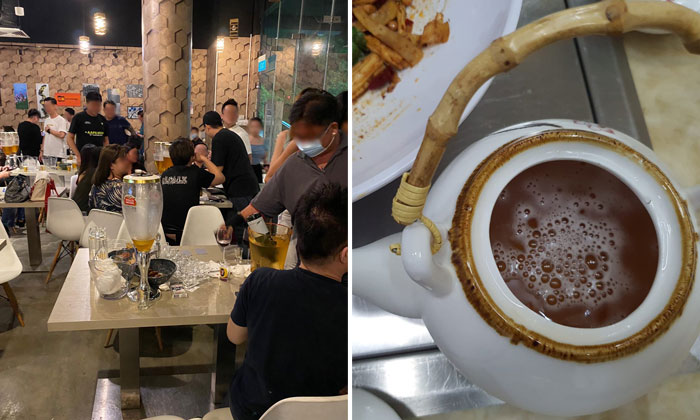 A bar at Science Park Drive and two restaurants have been ordered shut by the Singapore Food Agency (SFA) after they were found to have flouted safe management measures.

S-Tripes Hotpot, a restaurant in Havelock Road, will have to close from Sept 2 to 11, after SFA officers found that it had flouted various safe management measures.

This included the selling of alcoholic beverages after 10.30pm.

The restaurant's staff had transferred the alcoholic beverages into teapots and empty green tea bottles to avoid detection. Staff were also not wearing masks, or were not wearing them properly despite reminders to do so, said the agency.

The restaurant was fined $2,000 for the offences.

Whimsical Bar was ordered to close with immediate effect, after SFA officers found that the bar’s customers were consuming alcoholic beverages after 10.30pm.

It had also allowed groups of more than five to sit together and mingle, said SFA in a release on Monday evening (Aug 31).

The bar was also found to be operating without a food shop licence, and its tables were spaced less than 1m apart. It will have to remain closed till a licence is obtained, said the agency.

Its adjacent unit, the Create Kitchen, violated similar safe management measures, and was ordered to close from Sept 2 to 11. Both these businesses were fined $1,000 each for the offences.