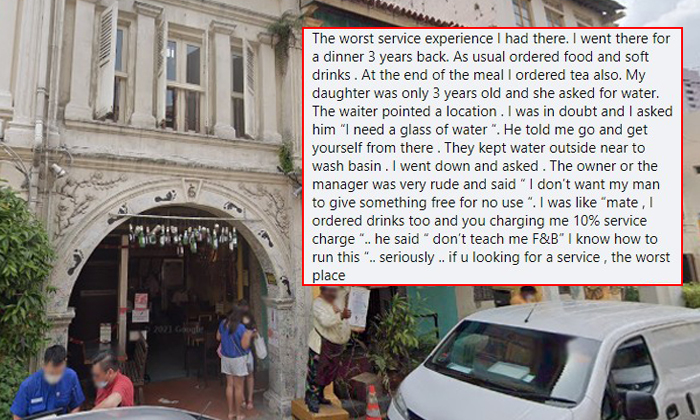 While negative reviews aren't uncommon in business, imagine a customer bearing a grudge even after three years.

The post, uploaded on April 7, was a promotional video about the restaurant's curry.

What caught the attention of Stomper X, an employee at the restaurant, was a comment made by Facebook user Ullas Chandran on April 14. 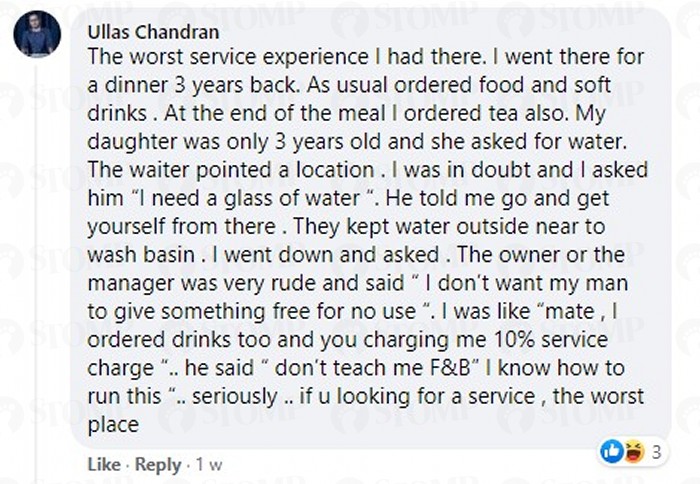 In his comment, the customer said he experienced the "worst service" while having dinner at Lagnaa Barefoot Dining... three years ago.

According to him, his then three-year-old daughter had asked for a glass of water. A waiter then pointed the customer to the water and told him to get it himself.

A verbal dispute apparently occurred between the customer and the restaurant manager.

The customer's comment prompted a reply from Lagnaa Barefoot Dining. 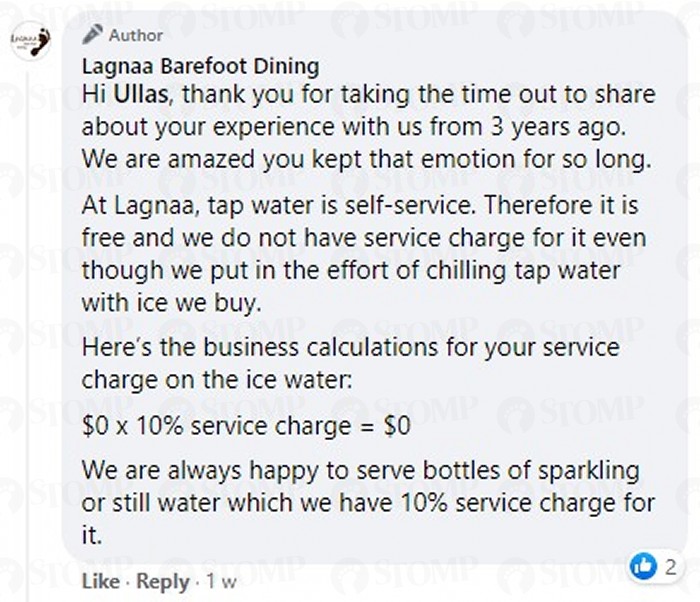 Thanking the customer for his feedback over a three-year-old incident, the restaurant said: "We are amazed you kept that emotion for so long."

It also explained that the water is self-service but free of charge, "even though we put in the effort of chilling tap water with ice we buy."

"We are always happy to serve bottles of sparkling or still water which we have 10% service charge for it."

This infuriated the customer, however, with him saying that he had actually left a review immediately after his visit. 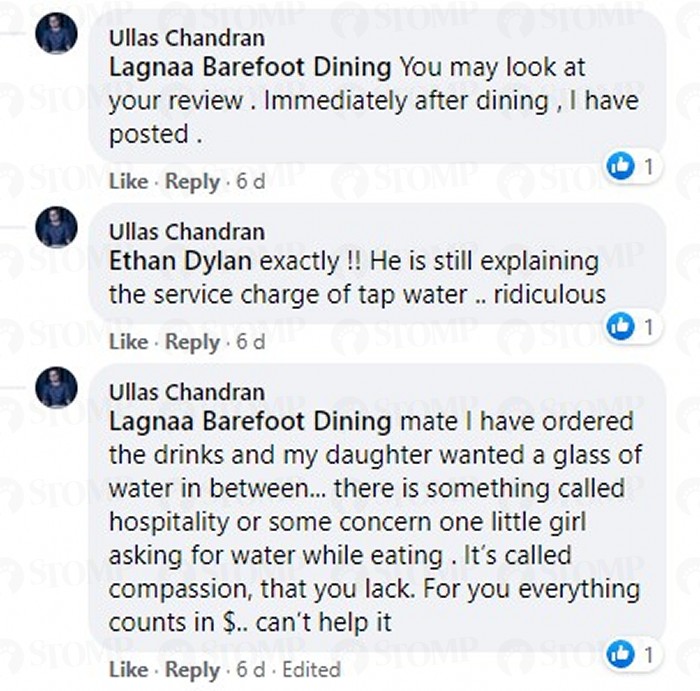 The customer also slammed the restaurant for a lack of hospitality and compassion.

Third-party responses to the dispute have been mixed.

While some felt that Lagnaa had indeed failed in terms of service and that the customer had not asked for much, there were also those who sided with the restaurant. 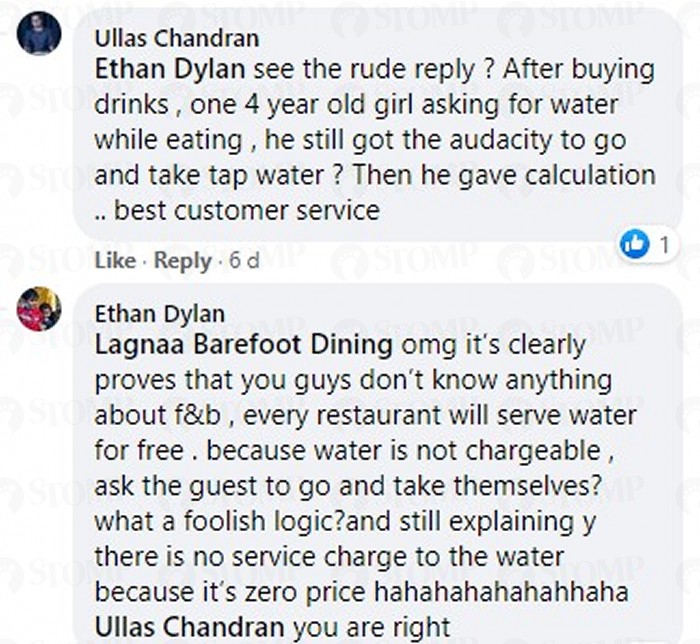 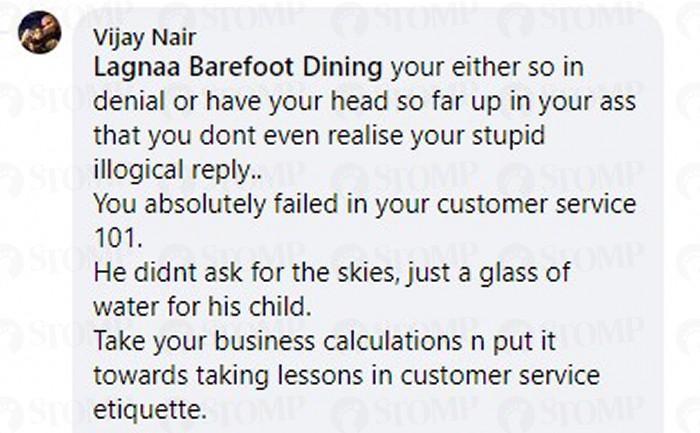 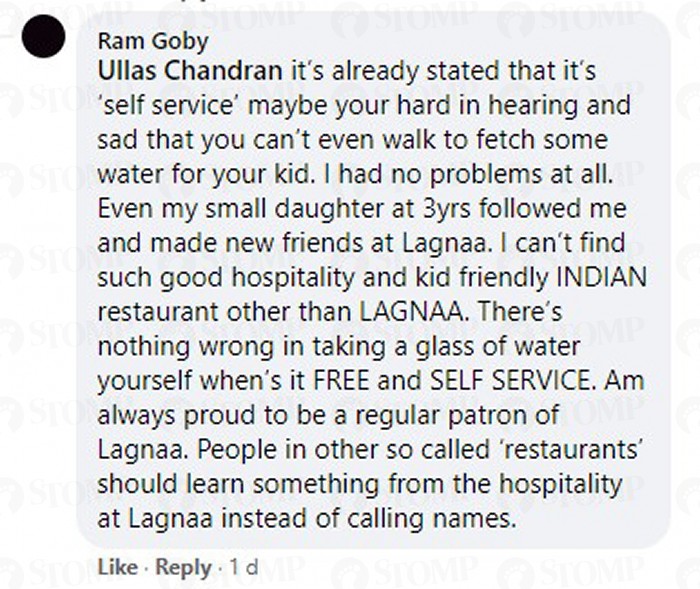 Some customers also expressed surprise at the complaint and shared their own pleasant experiences.

X told Stomp on Monday (April 26): "I found this to be fascinating! A diner is angry with a restaurant over getting FREE tap water and making a whole big fuss over it.

"Even coffee shops charge 50 cents for water. We don't want to be calculating to charge small amounts like this to our customers. We put ice and all inside to chill the water, and all we ask is they help themselves to it."

X said that the restaurant does not get such complaints often as people usually help themselves to the water after seeing that they are shorthanded.

She added: "The F&B industry in Singapore is badly hit by Covid-19 and the lack of manpower. How can people be so entitled?"