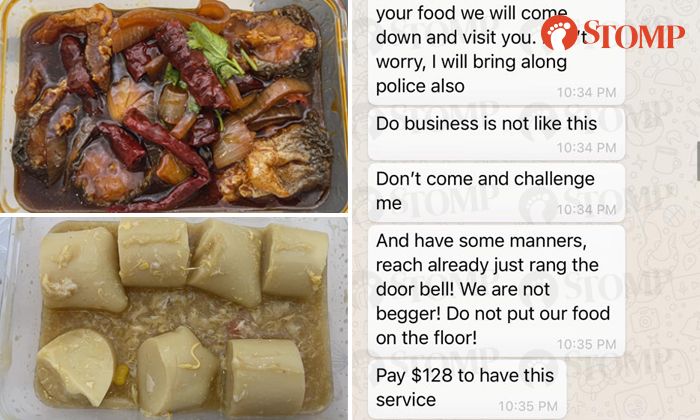 A restaurant has spoken out against a Facebook post by a customer who expressed dissatisfaction over the food and service that she received.

The customer had ordered a five-day tingkat service for three people at a price of $128 from Ohana by Adam's Corner, a restaurant that also provides catering and delivery services.

In a post on May 31, Facebook user DarDar Efyl shared photos of her order from Ohana as well as screenshots of her WhatsApp conversation with the restaurant.

Although the post was uploaded over a month ago, it recently gained traction again. It has garnered over 200 comments and 400 shares to date.

A reader, who wished to remain anonymous but said she had friends and relatives who had ordered from Ohana before, alerted Stomp to the Facebook post on June 30.

In the post, DarDar Efyl warned others to "order at your own risk" and said, "I pay already I also wanna cry, I see the dishes like that more worst I wanna jump down."

The customer added in her post, "Everyone says support F&B, I support but these services just cannot make it" and "Hospital food is much more better then yours".

Many netizens also shared similar experiences with Ohana in the comments.

One wrote, "Yesss they are the worst" while another commented, "This shop is legit f***ing bad".

In response to queries by Stomp, Ohana by Adam's Corner said that the customer behind the Facebook post had purchased the five-day tingkat promotion for three pax at $128 (usually priced at $139).

Ohana also shared more screenshots of its conversation with the customer, sent to Stomp in the following order:

Here is Ohana's response in full:

The customer was already upset from the beginning from our conversations with her over WhatsApp and over the phone as we do not serve rice with our standard tingkat.

Menu for the month was also provided to her for reference.

It is actually pretty standard that rice is chargeable across the board.

The customer claimed that we had not provided her food for three people as she had paid for.

Based on her photo confirmation (via WhatsApp) on the food received, it was indeed provided accurately by us.

Customer was the first drop for delivery.

The customer was requesting for a 7.30pm timeslot that we cannot adhere to as we have multiple deliveries islandwide and we could not commit to a specific timing for tingkat delivery.

The customer claimed that the delivery man had left the food on the floor. As we outsourced our delivery, we couldn't rack if any photo was taken upon delivery from the driver.

We had apologized to the customer on this and gave her an additional day of delivery to compensate for this error on behalf of the outsourced delivery service.

The customer then informed us that one of the dishes, a vegetable item, was spoiled by the time she consumed it.

However, we are not certain when she had consumed the meal, albeit that, we on our end did not deny our responsibility and had offered 1 whole fish (cost of $25) complimentary as service recovery to be delivered to her the following day.

Albeit all the service recovers from our end - The customer had demanded for a refund, which is unfortunately something we could not accede to.

Thus, we had personally spoken to her and agreed to her request for a change of delivery address instead.

However, she did not voluntarily provide us with the new address after the call.

The customer was being very abusive and threatening us over the WhatsApp chat as well as blasting her unhappiness on her Facebook.

On June 2, we responded to her text two minutes after she texted us and she proceeded to accuse us that we only replied to her after we saw all the comments on Facebook from her post.

The customer falsely accused us, with her stories although we had apologised and provided our service recovery to her, threatened us with authorities.

Attached as evidence, the WhatsApp correspondences between our admin team and the customer. Unfortunately, the call we had was not recorded.

Ohana by Adam's Corner hopes that this will help provide a "better picture of what actually transpired", it told Stomp.

The restaurant added: "Food is subjective and at the rate we are going, we have upset some but we also have made a lot of people happy.

"It is just the way it is. As much as we try to be great at all times, we just can't. And for those we had upset, we would usually do some sort of customer service recovery accordingly.

"Social media strives on negativity. We, as a restaurant, cannot prevent this from happening. We just try our best every day."