Restaurant owner found with 6.3kg of duck blood for sale fined $8k, had bought them on WeChat 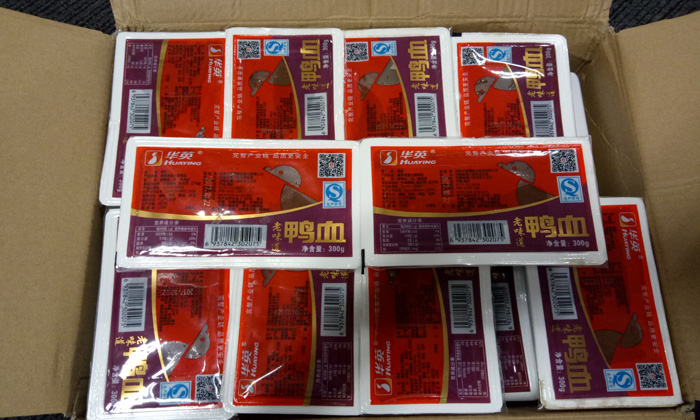 Following a tip off, the Agri-Food & Veterinary Authority of Singapore (AVA) found 6.3 kilograms of duck's blood available for sale as a dish to customers following checks conducted on Aug 31, 2017.

According to the investigation findings, the owner of Li Ji Chuan Chuan Xiang purchased the duck's blood from a man via WeChat.

The man who sold duck's blood over WeChat was separately charged in court for the possession of illegally imported duck's blood and meat products.

He was also charged for the abetment of illegal import of processed food.

The case is ongoing.

According to AVA, animal blood food products, such as duck's blood, are banned in Singapore as blood can support bacteria growth and foster diseases.

Unhygienic harvesting of blood can also result in the introduction of food borne pathogens into blood food products.

Only accredited sources in approved countries that comply with AVA's food safety standards and requirements can export meat, eggs and their products.

Illegally imported food products from unknown sources are not only a food safety risk, they are also a risk to our public and animal health.

Any person found to import illegal meat products from unapproved sources is liable to a maximum fine of $50,000 and/or two years' jail term or to both for first conviction.

In the case of a second or subsequent conviction, the person is liable to a fine not exceeding $100,000 or to imprisonment for a term not exceeding three years or to both.