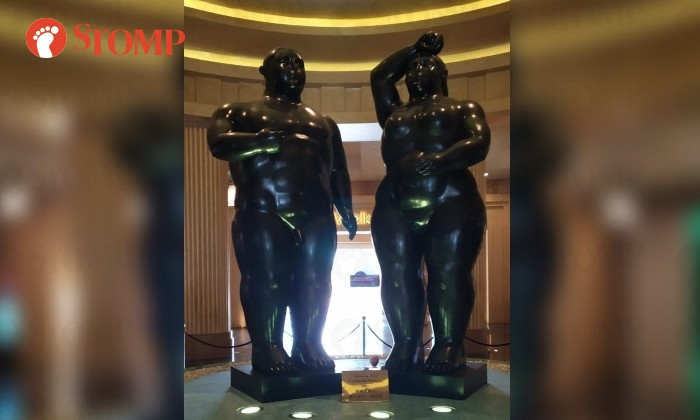 Resorts World Sentosa (RWS) has responded after a man expressed concerns about the statues found in the lobby of Hotel Michael.

Stomper Ramon said he was "shocked" to see the "naked statues" at the five-star hotel located in RWS on Friday evening (Sep 25).

"The statues are indecent and there are so many children around," Ramon said.

"Their private parts are huge too. It should be small if it is art."

According to the RWS blog, these statues are the works of Fernando Botero, one of the most famous Latin American artists.

His works can also be found all around the world, from Park Avenue in New York City to Champs-Élysées in Paris and even by the Singapore River at Raffles Place.

In response to a Stomp query, a spokesman for RWS explained that the artist behind the statues at Hotel Michael is known for his signature style of depicting objects in "oversized and exaggerated" dimensions.

The spokesman said: "The artwork – Adam and Eve – by renowned Colombian artist Fernando Botero is displayed near the entrance to Hotel Michael at RWS.

"Mr Botero is known for depicting objects in oversized and exaggerated dimensions which has remained his signature style across his many renowned sculptures and art pieces.

"Since RWS opened ten years ago, we have showcased many famous art pieces by acclaimed artists across the destination resort such as Space Elephant by Salvador Dalí, The Thinker by Auguste Rodin, and the Armonia Chandeliers by Dale Chihuly."

Related Stories
The Cathay and UK designer respond to feedback about Halloween decoration for Popek sculpture
'Coffin' at Clarke Quay bus stop slammed for being 'inauspicious' -- but it's actually a PR stunt
MSF and RWS reaching out to elderly couple after Stomper shares pics of them sleeping on public benches
More About:
sentosa
RWS
hotel