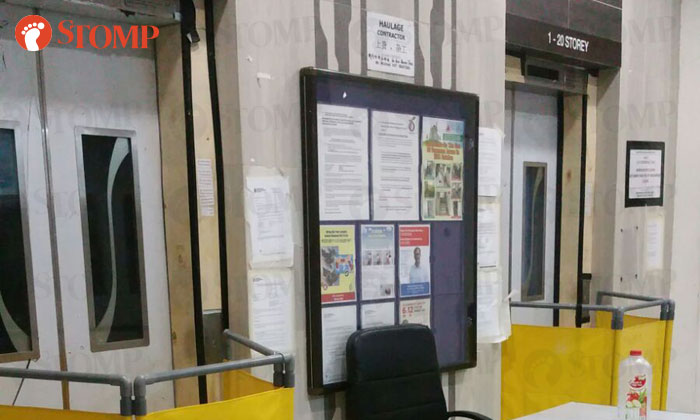 Stomper Hanif is frustrated at the ongoing problem residents of Block 296C Bukit Batok Street 22 have been having with the lifts.

Stomp previously reported on how the residents have been experiencing lift breakdowns for the past three months.

Stomper Hanif said on Jun 20 that the block has four lifts, but up to three can be faulty at one go.

The Jurong-Clementi Town Council responded to the incident on Jun 21 to assure the residents that efforts are being made to improve the performance of the lifts.

Yesterday (Jun 30), Hanif reported that the problem is still prevalent.

"I'm really speechless about this lift C and D.

"It broke down at 4pm but people from the lift company only came down at 8pm to look at it.

"My daughter and I had to go down by the staircase but there was an obstacle blocking us from going down.

"Worse still, my cousin was coming to visit for Raya but she and her family had to take the stairs."

Related Stories
Residents frustrated because lifts at 296C Bukit Batok keep breaking down in the past 3 months
Bukit Batok residents frustrated all 3 lifts break down -- twice in a single day
Kudos to kind resident and SCDF for helping to free woman who was stuck in condo lift for 1 hour
More About:
lift
Bukit Batok
breakdown
HDB
angry