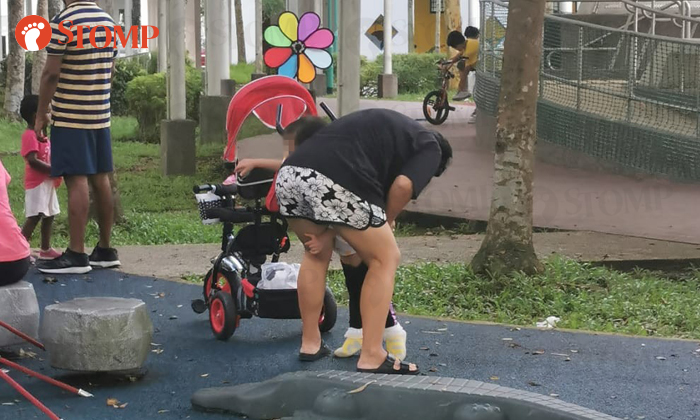 The sight of a woman letting her child defecate openly at a Bukit Panjang playground raised a stink among residents on Thursday evening (Aug 26).

A Stomper shared a photo of the incident which her friend witnessed at Block 140 Petir Road at around 6.30pm.

The Stomper said: "My friend and her husband brought their son to the playground and saw a lady pulling down her daughter's shorts.

"The woman asked her daughter to squat on the playground's slide platform (where kids sit before they go down the slide).

"Shortly after, the child actually let out POOP ON THE PLATFORM without anything underneath. Straight plopped on the playground where there were other kids who were playing nearby!

"My friend was so baffled by the unorthodox, unhygienic, barbaric and horrifying sight that she just confronted the lady.

"The lady said her child was ‘不舒服’ (meaning unwell or uncomfortable).

"Is this acceptable? Abso-effin-lutely NOT.

"My friend and I hope to share this to:

"Again, there are other kids playing and watching both of them."

The Stomper emphasized that her main concern was regarding hygiene, adding: "God knows if the lady cleaned up the poop that was left behind on the slide."