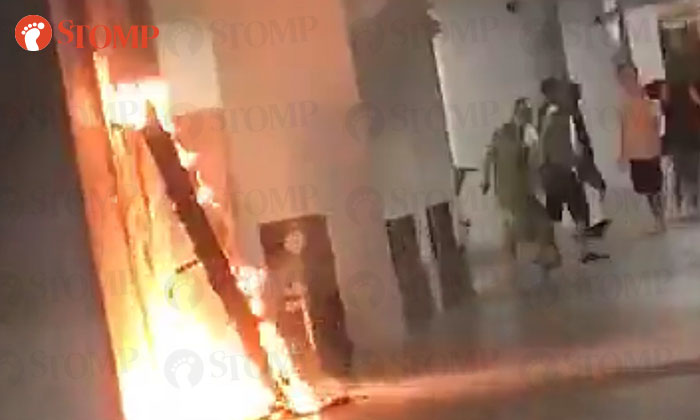 Stomper Rebecca who lives in the same block, was at home when she detected a smell of something burning.

She heard someone shouting from the block across hers, but attributed it to children playing.

The shouting got increasingly louder and she looked out of her bedroom window to see what was going on.

She could not see anything and went to her kitchen windows. It was there then she realised that some residents from the opposite block were shouting at her neighbours on the 2nd floor, asking them to pour the water down.

She suspected that something had caught fire in the void deck and went down to take a look.

Said Rebecca: "I did not see how the fire started but I went down to check because the smell was so strong.

"The police and Singapore Civil Defence Force (SCDF) were at the scene within five minutes by the time I went down.

"The police officers told us not to go too close to the fire as there were sparks.

"A second group of officers came and cordoned off the area.

"The fire was extinguished

“I feel it’s a serious problem when unwanted items, especially the bulky wines are thrown at the void deck. It can really get troublesome if the electrical wires had gotten burnt.”

In response to a Stomp query, an SCDF spokesman said: "SCDF was alerted to a fire incident at Block 512 Bedok North Avenue 2 at 8.40pm on Jan 30.

"The fire which involved discarded items was extinguished by the SCDF using one compressed air foam backpack and one extinguisher.