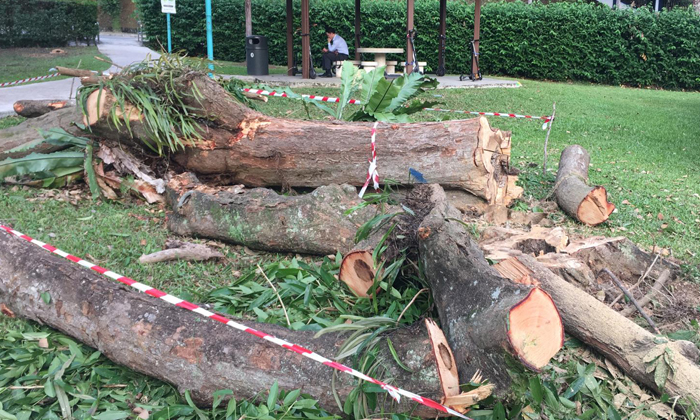 Six trees at Bougainvillea Park in Bukit Timah were found to have signs of internal decay and were structurally weak, leading to their removal for safety reasons, said the National Parks Board (NParks).

Stomper Xuehong, a resident along Watten Park, had prickled at the sight of the trees being cut down on Sep 30 and wanted to know why they were being removed.

She told Stomp: "They are taking down trees that give us shade and enhance our living environment.

"We residents expect an explanation."

He said in a statement: "During such inspections, a detailed visual examination of the root collar, trunk, and canopy of individual trees is carried out. Where necessary, a second level advanced tree inspection is then conducted using specialised diagnostic equipment.

"NParks values the benefits brought about by greenery. Decisions to replace trees are made in the interest of public safety after careful consideration, and in view of their site conditions.

"In the case of the six trees in Bougainvillea Park, along Watten Park, our arborists found that the trees had signs of internal decay and were structurally weak. They had to be removed for safety."

Mr Tay also added that a total of 16 semi-mature trees and 18 tree saplings will be planted as replacements.