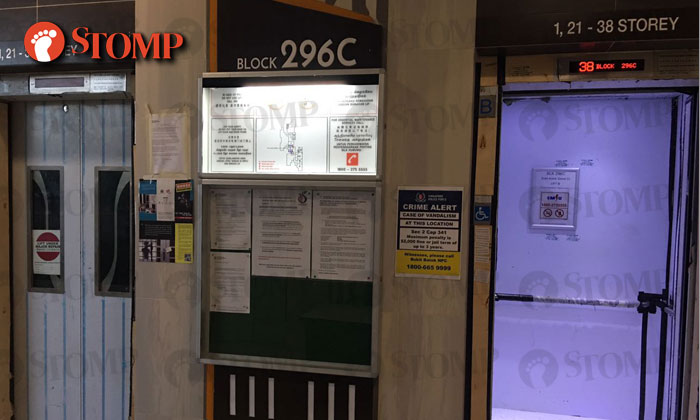 In response to Stomp queries, a spokesperson from Jurong-Clementi Town Council issued the following statement:

"HDB handed over the maintenance of these 4 lifts to the Town Council in March 2017 and we have been working closely with HDB and the lift company in monitoring the performance of these lifts.

"For Lift A and B, there was a total of 6 occasions (from March 17 to June 17, including the latest on 20 June 2017) where either of the lifts did not function properly.

"The lift company has been prompt in tackling the lift faults and putting the lifts back in operation as soon as they can so as not to inconvenience the residents.

"Lift A is currently not in operation as the lift company is conducting further checks on this lift.

"We assure the residents that efforts are being made to improve the performance of the lifts."

Residents at 296C Bukit Batok Street 22 Skyline II have been experiencing life breakdowns for the past three months.

Stomper Hanif alerted us to the breakdowns and told us in a telephone interview that his had been inconvenienced by the faulty lifts.

According to the frustrated resident, the block has four lifts, but up to three can be faulty at one go.

On average, he said that he has experienced two to three breakdowns a week.

Because of the faulty lifts, he has been late for work. Sometimes, he has to take the stairs as other usable lifts would be occupied.

His wife too, has to sometimes carry their child in a stroller up and down the stairs.

"I keep thinking about the residents in higher floors who are affected by the breakdowns. How are those with elderly family members going to go up and down the block?

His neighbour is also angry over the state of the lifts and took to social to air his grievances.

He said on Facebook in a caption accompanying photos of two lifts:

"What the hell is this??? Collected the keys in March, out of four lifts, three breakdown???"

Another Stomper staying on the 35th storey also told Stomp that two lifts were not working from 6am to 9.30am.

She also heard that another resident was trapped in a faulty lift yesterday (Jun 19) at around 10pm.

The Stomper, who moved into the block just three days ago, elaborated:

"How is this acceptable in a new premium BTO where many young families are staying?

"For adults it may not be as bad, but what about children, the elderly and the disabled?

Related Stories
Bukit Batok residents frustrated all 3 lifts break down -- twice in a single day
Kudos to kind resident and SCDF for helping to free woman who was stuck in condo lift for 1 hour
Pinnacle@Duxton residents stranded after lifts failed: Some had to climb 20 flights of stairs
More About:
lift
Bukit Batok
breakdown
HDB
angry
house