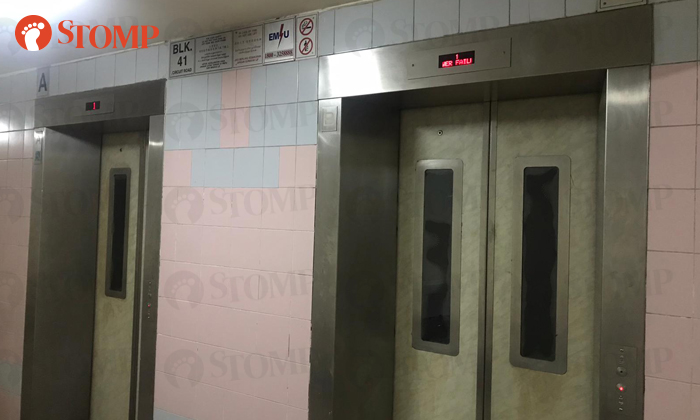 Both lifts at Block 41 Circuit Road broke down in the early hours of Thursday (July 23).

Stomper Arjun, a resident at the block, said that the incident happened at around 6.55am.

He told Stomp: "Lift A was not moving at all while Lift B showed a power failure."

"This is not the first or second time it has happened."

In November 2018, Arjun had shared how he was trapped in a lift at the block for "nearly 30 minutes" due to a breakdown.

In response to a Stomp query, a spokesman for Marine Parade Town Council said it is aware of the breakdown of Lifts A and B at the block on July 23.

The spokesman added: "The lift company had attended to the affected lifts to carry out thorough checks and repairs, and both lifts were up and running at about 8.40am on that day.

"Since then, the lifts have been functioning normally.

"We would like to thank the reader for his/her feedback, and we will continue to monitor the performance of the lift.

"Residents and members of public can contact our 24-hour Essential Maintenance Service Unit (EMSU) at 1800-325-8888 to highlight any similar issues."