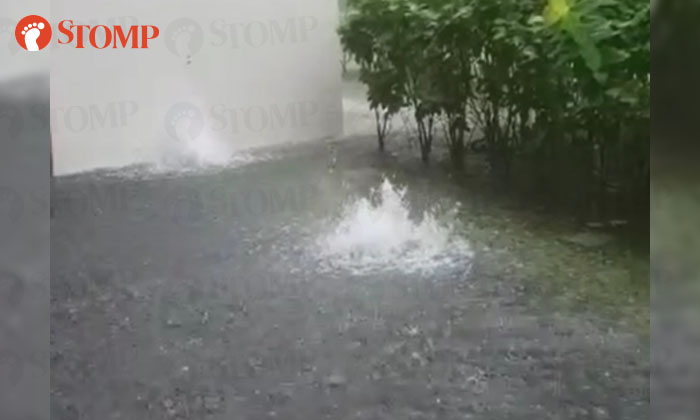 It was a gloomy grey afternoon at Fernvale Rivergrove in Sengkang as the heavy rain beat down on the area yesterday (Oct 23) afternoon.

But suddenly, mini water fountains appeared at Blocks 472A to 472C at around 2.30pm.

The 'fountains' were captured by Stomper A on his handphone camera.

In the videos, the walkways were flooded, but that did not stop Stomper A from looking for more fountains.

He discovered four to five of them around the three blocks.

He said: "It was raining very heavily, and I noticed all these fountains gushing up from the ground. It was fascinating and the walkways were all drenched."

Stomper A was not the only curious one.

He said: "Many other people were taking pictures and videos of the fountains too!"

The gushing water was an effect of the heavy rain the area experienced on that day.

He said: "I sent the videos to Stomp to share the interesting sight with everyone," he added.