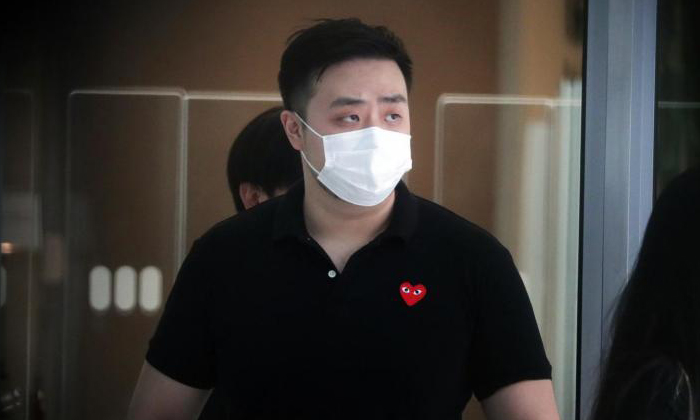 On a hunt for the latest sneakers, a shoe reseller bribed a Foot Locker Singapore employee with around $5,700 over 22 occasions in exchange for confidential information on new releases and discounts.

Meng Fanxuan, 26, got an edge in the resale market as a result, and he made around $6,000 from selling these shoes.

The Singapore permanent resident, who was a full-time national serviceman at that time, was on Thursday (Dec 23) fined $20,000 for a single charge of giving $5,681 as bribes.

Another charge for a similar offence was taken into consideration during sentencing.

The court heard that Meng, a Chinese national who had been collecting sneakers since 2008, became a reseller in 2019 after he sold a pair of Nike sneakers and made $29,000 in profit.

After that success, he would seek out sneakers to sell, mostly to customers from China.

In August last year, Meng met Xavier Goh Yixuan, 30, at the Foot Locker outlet in Jewel Changi Airport and agreed to give him a cut of the profits made from reselling shoes in exchange for insider information on limited-run sneakers and shoes on discount.

The court heard that there would be online speculation on the official release date of limited-run sneaker models about three to six months before they are launched.

The sneaker brands would announce the date to the public only about two months before the launch.

But Foot Locker employees would know the actual dates that these models will arrive at the outlets, which is usually the day before they go on sale.

As such information is not known to customers, it would give those who knew a higher chance of buying rare sneakers and reselling them at a higher price, said Deputy Public Prosecutor Hidayat Amir.

Goh, who was fired in January, broke the confidentiality agreement between him and his employer. He sent e-mails from Foot Locker’s marketing department to Meng, to alert him when limited-run and discounted models were available.

The pair had this arrangement on 22 occasions from August 2020 to January this year. Meng gave bribes ranging between $50 and $710 to Goh.

Meng told the court on Thursday that he was low on savings as he had just completed his national service. The judge allowed him to pay the fine in instalments over four months.

Meng is also said to have given $1,500 in bribes to another sneaker store employee, Muhammad Faiz Amy Jasman, 28, from AW Lab in Orchard Road to reserve limited-edition shoes for him on five occasions.

Both Goh and Faiz were charged with corruption in October. The duo, who are Singaporeans, will be dealt with at a later date.

In a statement in October, the Corrupt Practices Investigation Bureau (CPIB) said Goh had allegedly accepted more than $12,000 in bribes over 36 occasions from Meng and two other individuals.

CPIB said those who are convicted of a corruption offence can be fined up to $100,000 and jailed for up to five years.

Related Stories
Repeat drink driver offered $1,000 bribe to cop: 'Whatever you want, I will do for you'
Man caught not wearing mask properly tries to bribe cop with $50, gets $300 fine and 4 weeks' jail
Foreign sex worker got herself 'arrested' in order to extend stay in Singapore
More About:
illegal
corruption
bribe