'Report what? Report me to PAP? 999?': Passengers yell Hokkien obscenities at each other on bus 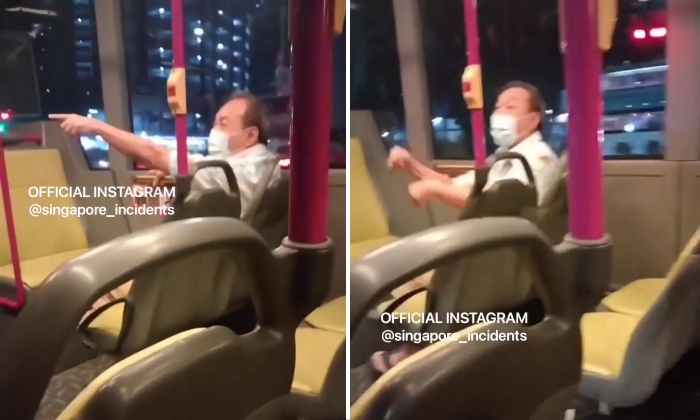 We all just want a peaceful bus ride.

But two men on a bus were not letting their fellow passengers have one.

One man was caught on camera in a war of words with the other man who is not shown in the video posted online by Singapore Incidents on Tuesday (Sept 13).

The video, which does not show the cause of the argument, is captioned "Uncles taunting each other in the bus".

It starts with someone saying the Chinese proverb "peace brings prosperity" in Mandarin.

But tempers soon flared as the two men started speaking in Hokkien and raising their voices.

The two ended up just yelling the male and female genitalia at each other.

A third male voice, presumably belonging to the bus captain, can be heard speaking in Mandarin in the background trying to get the two men to stop.

One netizen commented: "The only words I could understand were the bad ones."

Stomp had recently reported a similar incident where a bus passenger went on an expletive-filled rant after he was asked to turn down the music on his phone.

Related Stories
'Diam diam': Bus passenger goes on expletive-filled rant after being asked to turn down music
Man goes 'raving mad' after woman asks him to turn down music, both want to Stomp each other
Commuter asks bus captain, 'Why you drive so slow?' and wants everyone to know the answer
More About:
Bus
Passengers
vulgarities
argument