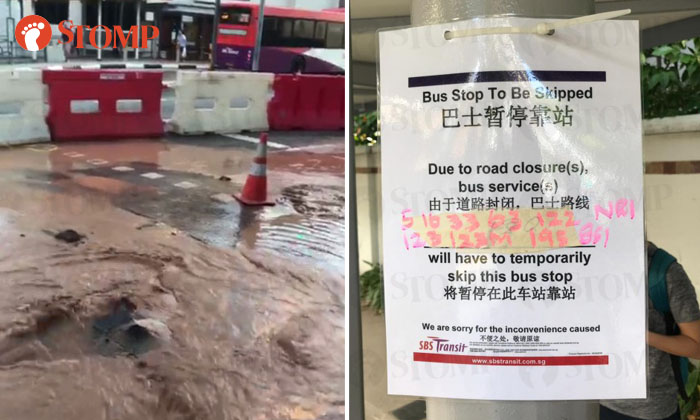 Repair works along Tiong Bahru Road were completed on Dec 2, following a pipe leak which took place on Nov 29.

Stomper Anonymous and Stomper Ahleongsab sent Stomp pictures and a video of the incident.

Stomper Anonymous also said that bus services in the area were affected.

In the video sent in by Stomper Anonymous, large amounts of muddy water can be seen on the barricaded road.

He also sent a picture, which shows a sign at a bus stop in the area, notifying commuters of the bus services that were affected.

At 6.24am on the day of the incident, public bus company SBS Transit tweeted that 10 bus services serving three bus stops were affected.

According to The Straits Times, one of the bus stops affected is located opposite Tiong Bahru MRT Station.

At 5.22am on Nov 30, SBS Transit said that the bus services would continue to skip a bus stop at Block 18 Tiong Bahru Road due to urgent roadworks.

In response to a Stomp media query, the Public Utilities Board (PUB) said: "PUB received a report of a pipe leak along Tiong Bahru Road, near Zion Road, at about 2.45am on Nov 29.

"PUB deployed our service van crew and contractors to the site immediately."

PUB said that the leak was isolated and that one out of two lanes along Tiong Bahru Road, towards Tiong Bahru Plaza, was closed to facilitate repair works.

Water supply to customers were not affected.

PUB, who is investigating the cause of the leak, told Stomp that repair works were completed yesterday (Dec 2).