Received this email from MAS asking you to change banking details? It's a fake 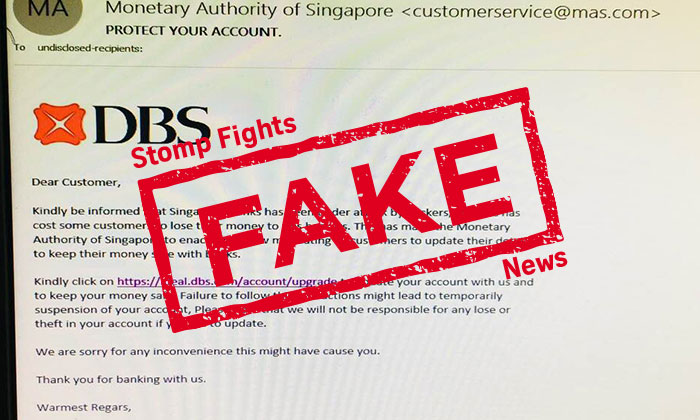 The email, claiming to be from the Monetary Authority of Singapore (MAS), states that some of the banks in Singapore have been under attack from hackers, causing customers to lose money.

“Kindly be informed that Singapore Banks has been under attack by hackers, and this has cost some customers to lose their money to this hackers.

“This has made the Monetary Authority of Singapore to enact a new law mandating all customers to update their details to keep their money safe with banks.”

A link to a phishing website is then provided.

The email ends off with a threat, stating that users’ accounts can be suspended if they do not update their account details.

Firstly, the email was riddled with grammatical errors and typos.

Secondly, although the address indicated that it was sent by MAS, the email seemed to have been written by DBS Bank instead.

The email bore the logo of DBS Bank, and was signed off with, “Warmest Regars, DBS Bank.”

Many netizens commented the phishing attempt was obvious given the quality of the email.

“The English is a dead giveaway.”

DBS posted an announcement on its website, warning customers about the malicious email.

It said that the email was not a legitimate email from the bank, and the link it provided led to a website designed to steal customers’ details, logins, PINs, and OTPs needed for fraudulent transactions.

DBS also urged customers to be vigilant and careful when opening attachments of unverified origins.

Related Stories
Beware of phishing email claiming to be from POSB
Green BFF "security test" on Facebook is fake news
Viral text saying anyone on phone while engine is running will lose licence on the spot is fake
More About:
phishing
con
scam
Stomp fights fake news