Received phishing link from contact named "OCBC"? It's not sent by the bank 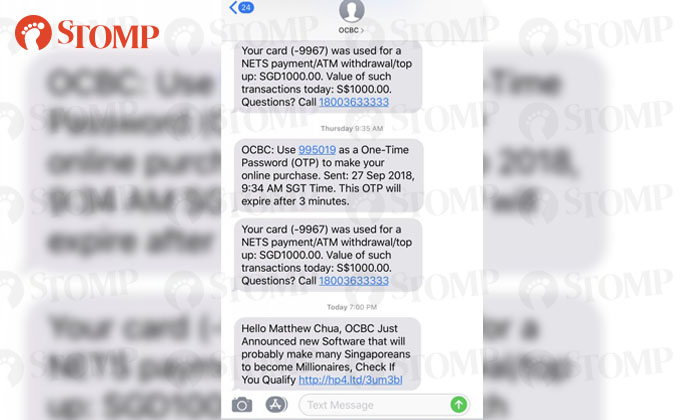 Stomper Matthew received a text message stating "OCBC announced a new software to make you a Millionaire", along with a link on Oct 2 at 7pm.

Matthew said he found the message suspicious, because it was in the same thread as the official messages from OCBC Bank.

Matthew sent Stomp the screenshot and said: "I'm very concerned and want to know if this is a security breach of OCBC Bank.

"Usually, the spam text messages come from weird handphone numbers, but this one came directly from what seems to be OCBC Bank."

Matthew contacted OCBC Bank about the matter and was told to block the sender's number.

However, he realised that he could not do so.

He said: "The number cannot be blocked because it is the number that sends me a one-time password (OTP) whenever I need to do my internet banking."

Stomp contacted OCBC Bank to find out more about this incident and they explained how the situation could have happened, as well as how to prevent it.

In response to the Stomp query, Mr John Francisco, Head of Corporate Security at OCBC Bank said: "We have received feedback from customers and non-customers regarding text messages similar to the ones received by the Stomper in your email.

"This is a phishing scam where fraudsters use various online tools to send a hoax message with an SMS short code mirroring that of a legitimate source such as financial institutions.

"Under existing technology, the message will appear in a conversation thread organised under the SMS short code of the legitimate source.

"There is no breach in our systems and no customer data has been compromised."

OCBC Bank also said it intends to reach out to Matthew regarding this incident.

They added: "Fraudsters operate such scams for various malicious intents, including enticing individuals to click on harmful links and to reveal their personal information.

"We have issued advisories to warn customers about this and these can be found at the following link on our website: https://www.ocbc.com/personal-banking/online-banking/security_advisory.html.

"The security of our customer accounts is of utmost importance to us.

"For this reason, we do not make unsolicited requests to ask for customers’ confidential banking information via SMS or email."

"Apart from arming themselves with knowledge about emerging scams, individuals need to be on constant alert to avoid becoming an unfortunate victim.

"Many public institutions, including OCBC, issue advisories from time to time to warn their customers and the general public about emerging fraudulent activities. Another good source of information on new scams is www.scamalert.sg by the National Crime Prevention Council."

Related Stories
Man stunned to find he's been paying $20 to $30 per month for service he did not subscribe to
Received an SMS claiming to be from UOB? It could be a phishing website
Man used multiple Carousell accounts to 'sell' staycation hotel tickets -- then went MIA after getting money
More About:
text
ocbc
bank
scam