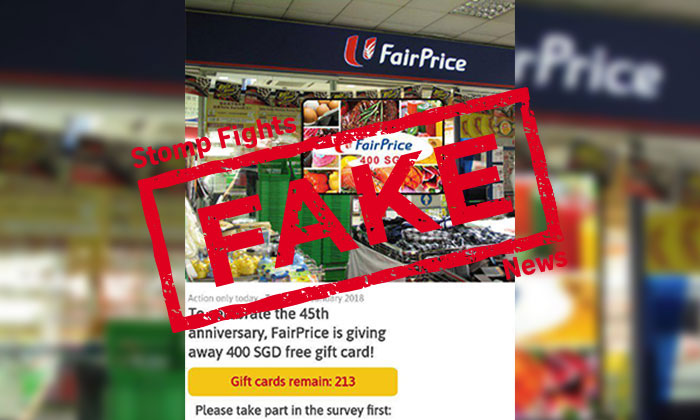 Several Stompers have reported receiving a link to a website claiming to offer an NTUC FairPrice gift card worth $400 in return for doing a survey.

The website claimed that FairPrice was giving away the gift cards in commemoration of its 45th anniversary, and participants would be eligible for a card if they send the link to 15 other friends, and took part in the survey.

Stomper Raymond was among of the people who received the link on Tuesday (Jan 9) at around 10am.

Dismissing it as a scam, Raymond did not believe it until he received the link from many of his ex-schoolmates and even his manager.

He became curious and went down to the Downtown East Fairprice supermarket at around 11.15am to verify the information.

Raymond said he spoke to the branch manager who called the headquarters and confirmed that that survey did not originate from FairPrice.

“The public should verify the information before sending to other people.

“The problem starts because you receive it from someone you trust, like old friends and just follow the instructions blindly.“

Stomper Casey also received several messages from several people whom he had not been in contact with for a long time, causing him to become suspicious.

"The message has been circulating on social media, WhatsApp.

"I’ve been receiving several of this message even from several people whom I’ve not been in contact for a long long time!"

To address the issue, NTUC FairPrice has posted an official statement on their Facebook page.

“PSA: Dear Shoppers, we were alerted of a new online survey scam that was hosted on multiple unofficial websites impersonating Fairprice.

"The site claims to reward customers with a SG$400 gift card voucher in celebration of our 45th Anniversary. Please be wary that this message was not created nor endorsed by us. We advise customers to ignore the site and avoid sharing the link.”

The post featured screenshots of the scam site, and even comments citing that the offer was real.

FairPrice reminded customers to be wary of the scams and urged them to share the information with their friends and family to avoid falling prey.