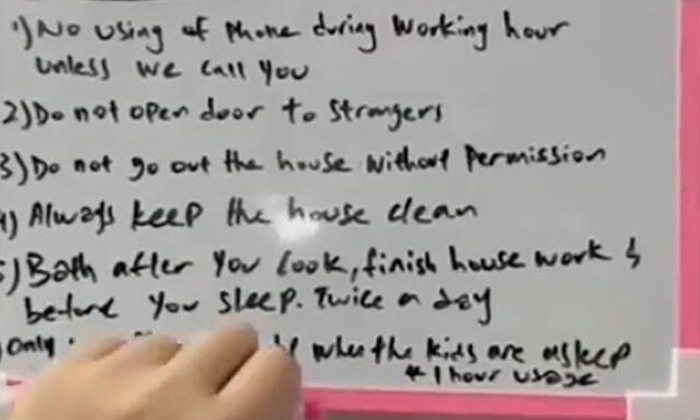 A domestic helper shared how she has to follow a list of rules set by her employer, sparking a heated debate online.

According to Shin Min Daily News, the maid's employer had written a total of 12 rules for her to follow on both sides of a whiteboard.

The maid posted photos of the whiteboard online, showing the list of "rules and regulations" that can be amended "anytime".

These include: No using of phones during working hours unless it's the maid's employers calling, no opening the door to strangers, no leaving the house without permission and to always keep the house clean. 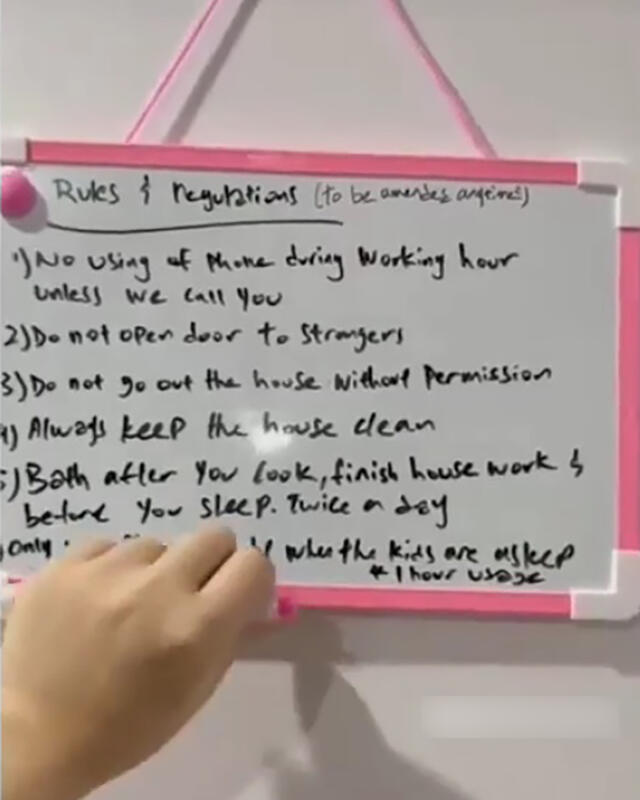 One rule also states that the maid must bathe twice a day, while another says she must stay within range of the CCTV camera, reported Shin Min.

Maid agencies in Singapore have weighed in on the matter.

In response to media queries, a spokesman for Sincere Maid Agency said some of the listed rules are reasonable. However, he also noted that too many rules by an employer might make the maid feel pressured as well as cause tension between both parties.

Best Home Employment Agency's executive director Mr Zheng Kunming said employers should inform the maid agency in advance if they have any special requests so that they can communicate it to the maid.

Additionally, domestic helpers who are dissatisfied with their employers should let the agency handle matters to avoid unnecessary misunderstandings and disputes, reminded Mr Zheng.

Related Stories
Man leaves vulgar note for driver who parked properly at Tampines Mall
Errant driver gets note telling him not to obstruct traffic 'by order of Telok Kurau residents'
Jaguar driver gets note saying someone put nails in tyres for parking like 'idiot'
More About:
maid
unusual
note