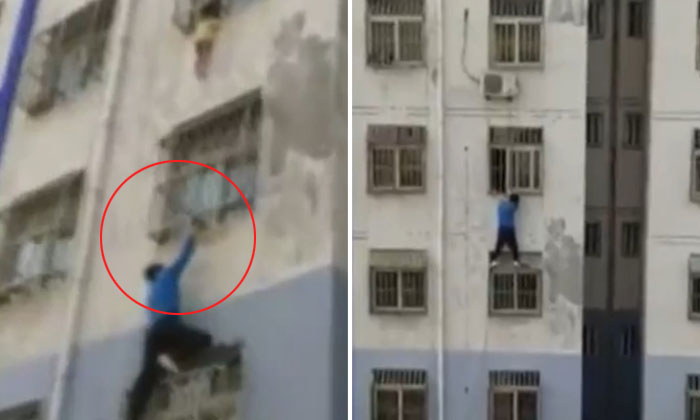 This man from East China's Shandong province shot to global fame after his heroic Spider-Man-like rescuse of a two-year-old toddler dangling from a window on Oct 27, reported The China Daily.

A resident of Liaocheng city and a physical sports enthusiast, Liang Lei climbed to the third floor of a building with his bare hands to save the toddle who was stuck between the bars of a security window.

According to CCTV news, the toddler was left alone in his house by his parents.

"I got there and found the boy barely moving. His legs were shaking. I decided to climb up as I thought he was in danger," said Liang.

After his heroic deed was published on Facebook by the media, it spurred heated discussions amongst netizens all over the world.

Many called him a 'hero", saying the toddler was lucky to be saved by someone like him.

Some others blamed the toddler's parents for their carelessness and irresponsibility.

Related Stories
My dad, the hero: Off-duty fireman comes to the rescue of child locked in lorry at Woodlands Blk 302A
A year after Sabah earthquake: Fiancée of hero who died saving pupils still wears ring
We can all learn from this kind foreign worker who helped old woman cross the road
heartwarming
inspiring
heroes
baby
China
toddler
building
scary