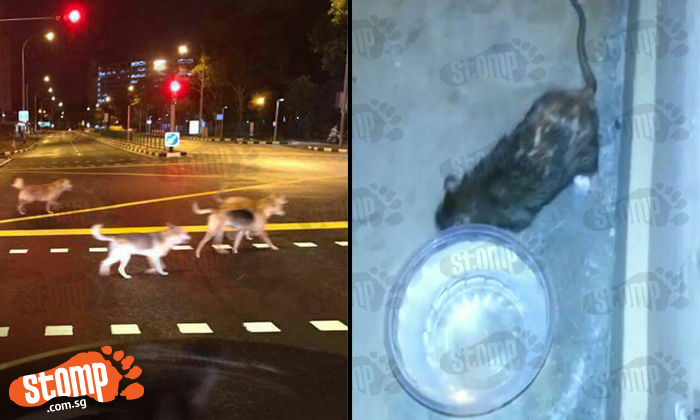 Submitted by Stomper Be Fair

Stomper Be Fair was upset to see stray cats climbing on his truck at Yishun Ave 1, and appealed to animal feeders to be responsible when they feed stray animals.

The Stomper said he had noticed rust on his truck but had only discovered the cause when he saw stray cats climbing and urinating on it.

“Cats will find rough edges like vehicle tyres and motorcycle leather to scratch their nails on.

“As they jump up to extreme heights, they are also bound to leave claw marks on vehicles.

“Who will be responsible for any damage caused by the cats?”

The Stomper also said the uneaten pet food left behind by the animal feeders attracted cockroaches and rodents, in turn posing hygiene risks to residents in the area.

The photos he submitted to Stomp show some of the pests he has seen attracted to the leftover food around Yishun.

“It is basic responsibility as an animal feeder that you come back to clear the leftover food,” he said.

He said he had contacted the Society for the Prevention of Cruelty to Animals and the Agri-Food & Veterinary Authority of Singapore to remove the stray cats from the estate, both to protect residents from the pests, and to protect the cats from stray dog attacks and cat abusers.

The Stomper, who feeds off-island strays every week, said:

“The cats and dogs could be sent to live in a place where there are not many humans. The cats can be sent to the cat island, St. John’s Island.

“If genuine cat lovers exist, they would not mind the trip to feed or take care of the cats.”

“Please be fair, animal feeders. If you want to feed, bring them home.

“For the safety of public health, remove all strays from residential areas and ban all stray feeding. Let nature do the job.”