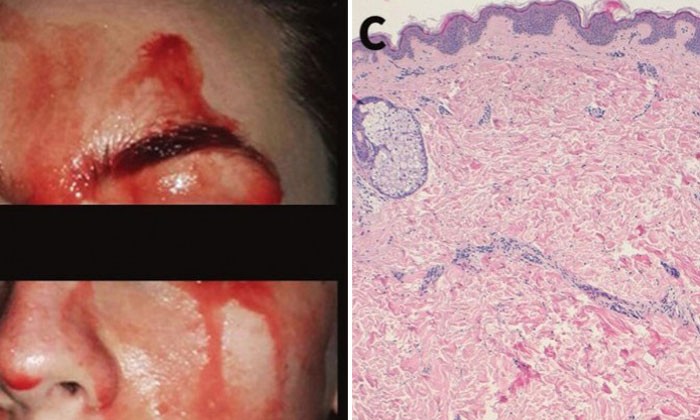 Although there were no lesions on her skin, a rare condition has been causing a young Italian woman to sweat blood from her palms and face for the past three years.

Her unusual affliction was recently documented by doctors from the University of Florence in the Canadian Medical Association Journal.

The 21-year-old bled in episodes that lasted between one and five minutes, and doctors found no obvious trigger for the bleeding. Her condition became worse whenever she was under emotional stress, Dr Roberto Maglie and Dr Marzia Caproni wrote in their report.

The woman felt embarrassed about the bleeding, causing her to isolate herself from others.

She was prescribed medication for her depression and anxiety but they did not help to alleviate her condition. It only improved after she started taking a medicine for high blood pressure.

The young woman was diagnosed with mental disorders and hematohidrosis, a rare condition in which a person's capillary blood vessels that feed the sweat glands rupture and cause bleeding.

Hematohidrosis tends to occur during times of extreme physical or emotional stress and most commonly affects the face, according to the National Institutes of Health.

Medical experts have yet to pin down the exact cause of hematohidrosis, as the condition has also been linked with increased vascular pressure, systemic disease, bleeding disorders, menstruation, excessive exertion, and high blood pressure, among others.

Even though it has been described as a rare condition, there have been other reports of people suffering from hematohidrosis.

Earlier this year, the Indian Journal of Psychological Medicine documented the case of a 10-year-old girl whose scalp oozed blood for about a week.

She was not in pain during the episodes and doctors found no signs of broken skin or infection.

It was later found that her father's strict parenting had stressed her out and a fight in school may have triggered the bleeding. The girl's condition improved after she started taking medication for depression and anxiety.