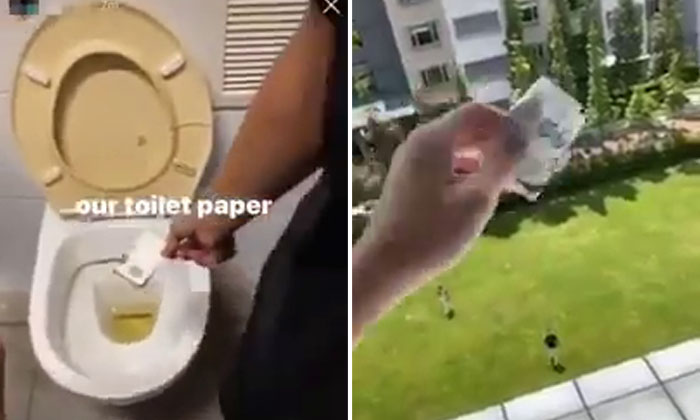 Raffles Institution has expressed disappointment in its students who were seen flushing a $50 note down a toilet and throwing more from a building.

Their actions were caught in a series of videos that were posted on Instagram Stories.

One of the videos has the caption "whoops" and shows a $50 lying on top of a shelter beyond a parapet.

In another video, one student is seen throwing more money from the building.

One clip shows a student holding a $50 note and throwing it into a toilet with the caption "our toilet paper".

In response to a Stomp query, the principal of Raffles Institution Mr Frederick Yeo said:

"The school is disappointed with the irresponsible behaviour of three of our students throwing money in such a careless way.

"We will never condone such actions and have firmly counselled the students on the severity and insensitivity of their acts.

"We will also take strict disciplinary action against all three of them.

"The students have expressed remorse and regretted their actions.

"We have also informed their parents about the incident.

"The school is confident that the students will learn from their mistakes and commit to higher standards of behaviour in future."