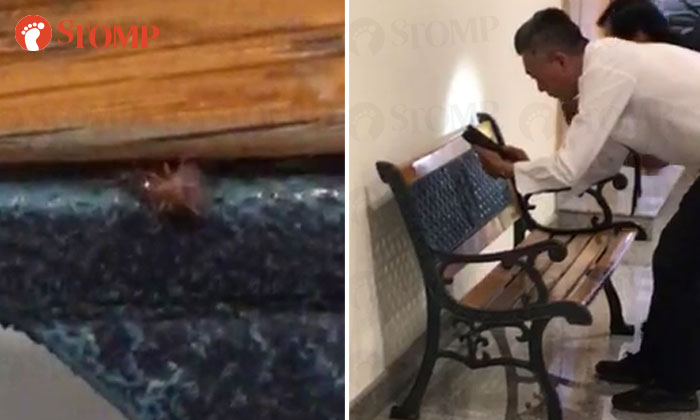 Raffles Hospital has removed benches located in its public area after a Stomper was bitten by what appeared to be bed bugs while sitting on one of them.

Stomper Z informed Stomp that he had stopped to sit at a bench in the indoor public area of the hospital on Friday (Jan 4) at about 12.48pm when he suddenly started experiencing sharp, "pinching" pains on his back.

"I was passing through the hospital on my way to lunch when I needed to reply to an email," he said.

"I sat at the common bench and began to type but after a while, I felt a pinching pain on my back.

"To my horror, I found loads of bed bugs hidden in the bench's crevices."

Z shared a video showing several bugs crawling between a gap in the bench's backrest.

The Stomper then alerted security guards to the insects who told him that they would call for pest control.

"It's so irksome and I feared that some of the bugs may have hitched onto my clothing.

"I had to look for a new set of clothes to change into before feeling secure enough to sit in my car to head off again."

In response to a Stomp media query, a spokesman from Raffles Medical Group issued the following response:

"Raffles Hospital has removed the benches located at the public area and pest control efforts are in place.

"Regular checks are done to ensure the health and safety of the public."