Queenstown resident greeted by rubbish outside her flat: 'What an eyesore!' 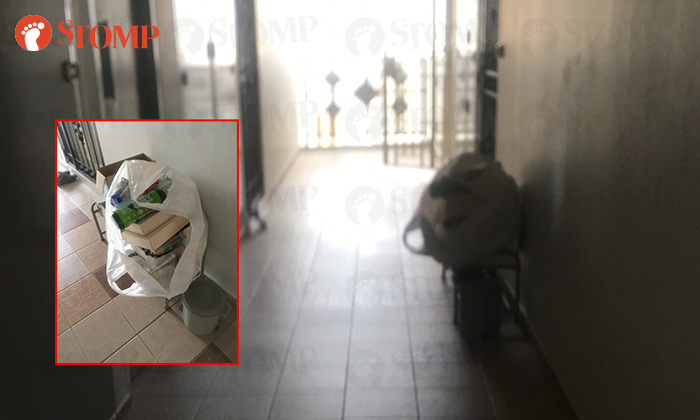 Tanjong Pagar Town Council told Stomp that they're aware of this case and will be monitoring it closely.

Responding to a Stomp query, a spokesperson said: "The flat owner does recycling and places the items collected at the common corridor before sending it to the recycling centre.

"We have informed the flat owner not to leave their items at the common corridor."

A resident at 50 Strathmore Avenue has been irritated by the pile of rubbish left along the corridor beside her unit.

Stomper H contributed photos of what she saw and said: "I first noticed this when my neighbours moved in about three months ago.

"They have their own recycling bin outside their unit which is constantly filled with items.

"What's ironic is that we have a recycling bin on the ground floor and the rubbish chute is just three steps away.

"Every evening after a hard day of work, I'm greeted by rubbish.

"Complaints have been made to town council about this eyesore and potential fire hazard.

"My neighbours do remove the rubbish but they will appear again

"I've never confronted my neighbours about this.

"The fire exit is right outside my neighbour's unit.

"This eyesore is not only a potential fire hazard but it's also an obstacle to the fire exit."

Related Stories
Driver throws litter out of car and spits onto road at Serangoon
Boon Lay resident frustrated about piles of items left at staircase landing: 'Why like that one?'
Driver tosses rubbish out of car while waiting at Upper Serangoon Road junction
More About:
rubbish
litterbug
Queenstown
litter
inconsiderate