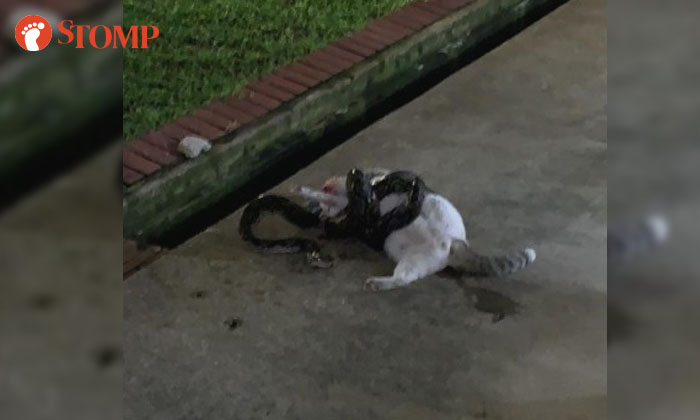 A python killed a cat by coiling itself around it at the foot of Block 726 Jurong West Avenue 5 on Nov 16.

A Stomper's brother was on the way home from work at about 10.40pm, when he captured pictures and videos of the incident.

He had seen the snake coiled around a writhing cat.

Due to the graphic nature of the videos, Stomp is not including them in the article.

In one of the two videos sent to Stomp, the cat was seen trying to break free from the snake wound around it.

According to the Stomper's brother, it stopped moving after two to three minutes.

She said: "My brother wanted to save the cat, but it had already died."

In the other video sent to Stomp, the snake slithered into a drain, while two other bystanders watched.

According to her brother, the snake was still in the drain at 11.26pm.

He had been standing around the area, keeping an eye on the snake.

"My brother stayed there for over an hour to make sure the snake did not slither away or harm anyone," the Stomper added.

Her brother contacted the Animal Concerns Research and Education Society (ACRES) at 11.27pm and told them to catch the snake.

According to the Stomper, ACRES arrived a while later at about 12.30am.

In response to a Stomp query, ACRES said: "ACRES received a call about a python that was coiled around a cat at Jurong West.

"We responded but we understand that the snake had moved into a covered drain. The cat was already dead.

"The presence of the crowd probably caused the snake to let go of the cat and move away as they are generally shy animals.

"Pythons are well adapted to our urban jungle as their main prey, rats are found in abundance.

"Every now and then, cats do fall prey as well as their curious nature usually brings them close to the snake.

"In a way, it's an eco-system within our urban jungle, where we have come across cases of pet/domesticated animals killing wild animals as well, such as snakes, lizards and birds of varying species."