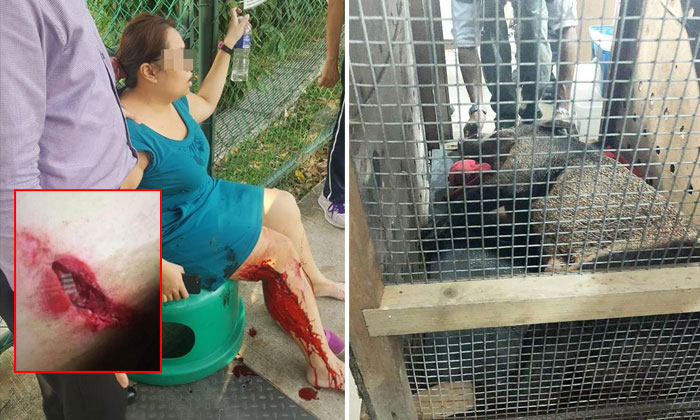 A pregnant woman who was attacked by a wild boar in Punggol on Tuesday (Aug 28) has spoken out on the ordeal that left her with a vicious bite and lacerations on her back, arms, and legs.

Stomp previously reported that the woman in her 30s was taken to Khoo Teck Puat Hospital (KTPH) after suffering lacerations in her encounter with the boar near Punggol Secondary School where she works as an administrator.

Recounting the incident from her hospital bed in KTPH, Ms Ng told Wanbao that she did not provoke the animal.

"I was listening to music on my earphones and I did not feel anything amiss before the incident.

"A strong force then knocked me down from behind."

"Only when I was knocked to the ground did I realise that it was a big wild boar."

She said the boar repeatedly charged at and bit her, tearing her blouse and gashing her on the back. 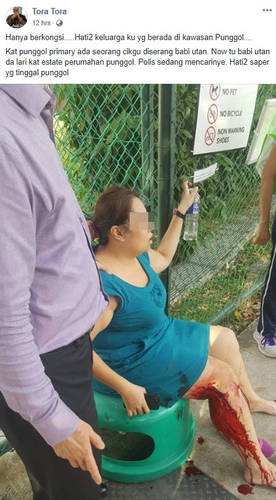 Ms Ng said that she was dazed, in pain and had no strength to escape as the boar lingered around her.

The attack ended only when a passing cyclist stopped to use his bike to fend off the animal.

The animal did not run away until two Punggol Secondary students rushed to the scene and used the lid of a nearby rubbish bin to help the cyclist protect Ms Ng.

The wild boar was later found at the nearby Waterbay executive condominium where it was trapped in a bin centre by security guards.

It was later tranquillised and captured by staff from the Animal Concerns Research and Education Society (Acres) who relocated it to the Lorong Halus area.

"Now I'm worried that there will be danger for the students (at Punggol Secondary School)," Ms Ng told Wanbao.

"There is also a pre-school opposite and if the young children were attacked, the consequences would be unimaginable."