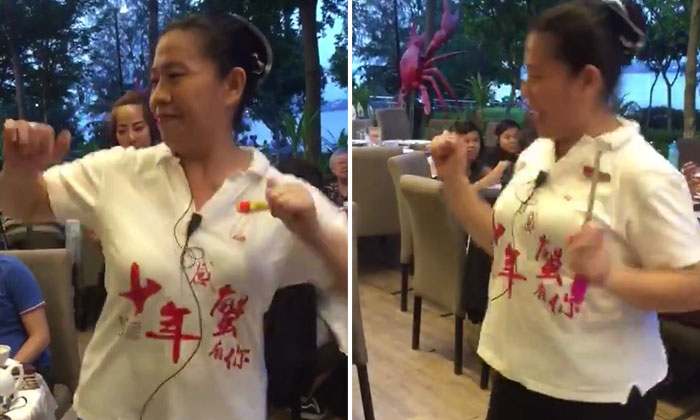 A middle-aged waitress is seen performing a "chicken dance" at a restaurant in Punggol before and after lighting a chicken on fire.

In a video that was uploaded by Facebook user Anthony Boey, the waitress is seen dancing to a song that is filled with the sounds of chicken clucking in the background, her agile movements nailing every beat of the song.

Really don’t know what to say!!

With the music still playing in the background, she then proceeds to light the huo ji up, which translates to "fire chicken" in Mandarin.

She then resumed her dancing and only stopped when she announced that the chicken was ready to eat.

After asking whether they wanted the chicken to be cut in the kitchen or "self-service", she told the diners that she "hopes that it can gain their satisfaction" before thanking them.

The video, that has since garnered 1.1 million views as of 3.43pm on Aug 30, is filled with comments that are of mixed sentiments while some even said "money damn hard to earn".

However, the Internet dancing sensation, Madam Loh Feng Ling told The Straits Times on Thursday (Aug 30) that she did it on her own accord.

"I am just an auntie who loves to dance and gao xiao," said the 52-year-old in Mandarin, using a term that means to make people laugh.

She also attributed her dancing skills to her stint as a karaoke joint employee in her younger days.

"I did it out of my own sincere desire. No matter what kind of music is played, I will naturally follow and dance," she said.

Even though Madam Loh felt conscious about some of the negative feedback, customer satisfaction comes first for her.

"Whatever the dance, I will put in my heart and soul," said Madam Loh, who is married to a construction worker and has three daughters aged 12, 18 and 21.

Related Stories
Girl busts out dance moves on China train -- but commuter next to her is #NotAmused
Video of AirAsia steward dancing onboard empty plane goes viral, CEO responds
You wish you could dance as well as this kid does for Ed Sheeran's Shape Of You
More About:
dancing
unusual
funny