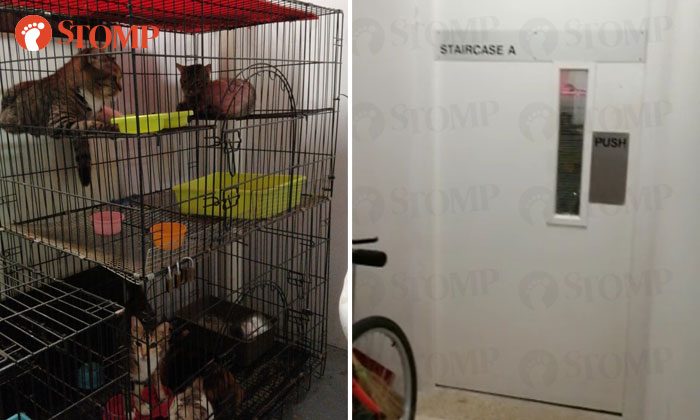 Pasir Ris-Punggol Town Council has issued an advisory notice and warning to a Punggol resident for keeping cats in cages placed at a staircase landing at Block 622A Punggol Central.

Stomper Sally informed Stomp that she had noticed five cats contained in three cages on the 10th floor of the block.

She said that the cages are blocking the staircase.

"The dirty cages have been there for months, causing a stench and distressed meowing to travel to other floors," she said.

"Residents are concerned that such blockage causes fire escape concerns not to mention the poor fate of those cats."

In response to a Stomp query, the town council said it has been engaging with the resident and owner of the cat cages since January this year.

"We understand that the resident is currently working with the relevant authority and Cat Welfare Society (CWS) to rehome the cats," a town council spokesman said.

"While we appreciate her animal rescue efforts, we are unable to allow the placing of cat cages at common areas for the safety of other residents and for the well-being of the animals.

"The resident has since been issued with our advisory notice, a warning, and has promised to remove the cages by 19 February 2021.

"She is also aware that we will issue an Offence Notice upon non-compliance by the deadline given.

"We hope that Stomp can also help us spread the notion by emphasising the importance of keeping the staircase landing free of obstruction at all times."

Responding to a Stomp query, SPCA's executive director Dr Jaipal Singh Gill said: "Cats should be kept free roaming within the home and not confined in cages like this.

"The witness should lodge a report with us via our website (https://spca.org.sg/cruelty-welfare/) and we will work to improve the conditions for the cats."