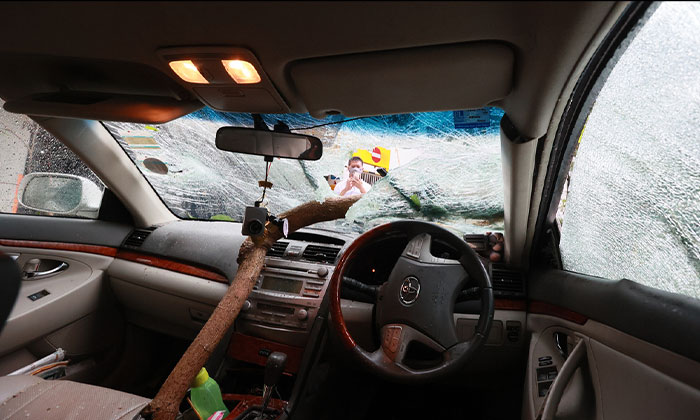 A Punggol resident found himself pinned in the driver's seat by a tree that fell on his car on Sunday afternoon (Feb 20).

During a thunderstorm at around 3pm, the tree at Block 289C Punggol Place fell and crashed through a shelter just as Mr Gary Gong, 54, was about to turn into the carpark of the estate where he lives.

The tree, which is about four storeys tall, then landed directly on top of Mr Gong's Toyota Camry.

Two of its branches, which Mr Gong, a part-time real estate agent, estimated to be about 10cm in diameter each, shattered the windscreen and a window and went into the car.

Speaking to The Straits Times (ST) on Monday, Mr Gong recalled the harrowing experience of how he had narrowly missed being impaled.

"One branch pierced through the windscreen directly in front of me but became stuck near the gearbox next to my left leg," he said.

"The other pierced through the window of the driver's door, narrowly missing my right leg."

Mr Gong said he was so shocked by the incident that he could not move for about five minutes.

"I wasn't scared at first, just shocked because it was so loud when everything came crashing down in the rain," he added.

"But then I slowly realised what had happened and my entire body went limp."

He tried to open the door to get out but found that the fallen tree had formed something of a cage around the car.

An SCDF spokesman said its officers used cutting equipment to rescue Mr Gong, who was not injured. It took them about 10 minutes to free him from the mangled wreck. 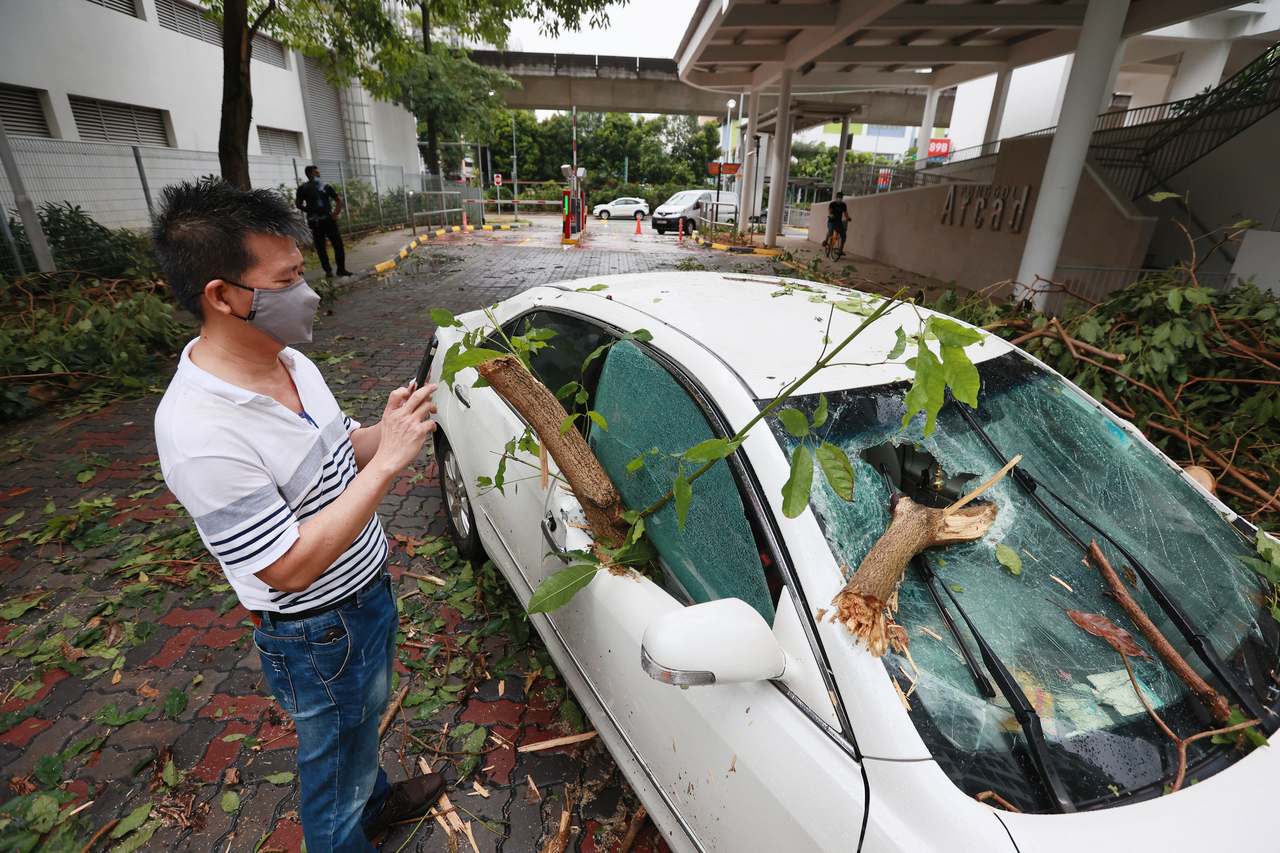 Two branches, estimated to be about 10cm in diameter each, shattered the windscreen and a window and went into the car. PHOTO: SHIN MIN DAILY NEWS

Mr Gong, who has lived in the Punggol Arcadia estate for 10 years, estimated that it would cost more than $10,000 for his car to be repaired, with his insurance company assessing if he will be able to make a claim.

He added that if he cannot claim from his insurer, he intends to take up the issue with the town council.

"I'm scared now just looking at trees, especially when it's raining," he said.

"I almost died. I would like to know what the authorities are going to do to prevent this from happening again." 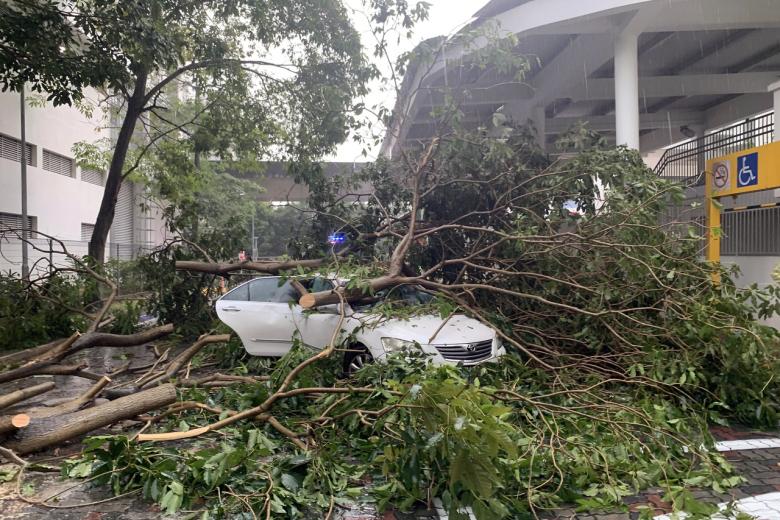 ST understands that the tree is under the purview of the Pasir Ris-Punggol Town Council, and has contacted the council for comment.

When ST visited the estate on Monday afternoon, maintenance contractors from the National Parks Board were seen clearing a lorry-load of branches from other trees that were damaged in the storm.

At least three trees next to a nearby basketball court and two next to a playground appeared to have been badly damaged.

Residents told ST they were worried that the trees in the estate were not being maintained regularly. 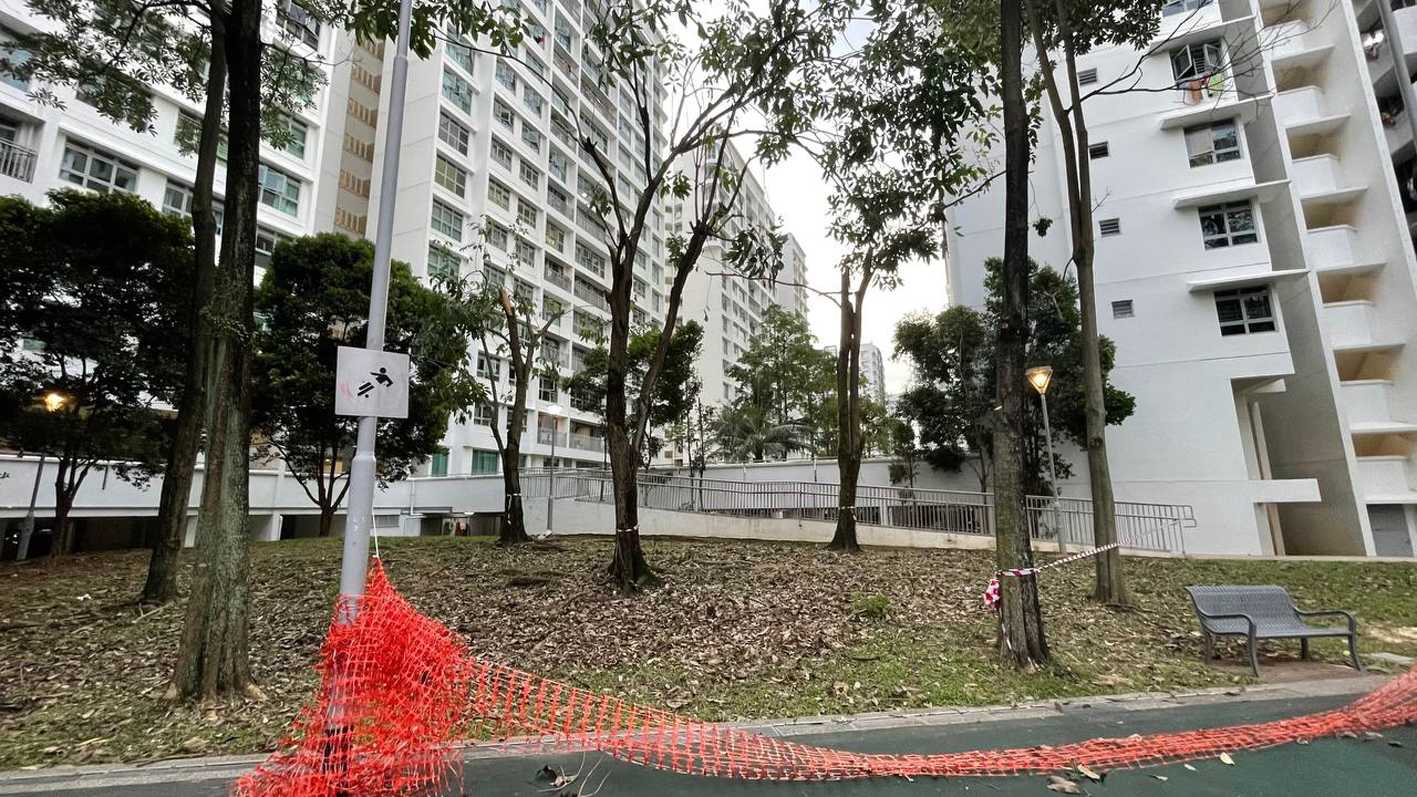 At least three trees next to a nearby basketball court and two next to a playground appeared to have been badly damaged. ST PHOTO: DAVID SUN

A man in his 40s, who declined to be named, said the trees appeared to have been neglected.

He said: “The branches grow all over the place, but no one seems to have done anything about them. It’s only now that I see maintenance workers pruning some of the damaged trees.”

Another resident, who also requested anonymity, said she had not seen such strong winds since moving into the area eight years ago.

“Part of a tree next to the playground had fallen on a multi-purpose shelter,” she said of the impact of Sunday's downpour. “It’s a bit worrying because a lot of kids are in the area, though it’s unlikely they would have been playing outside in a storm.”

In its advisory on Feb 16, the Meteorological Service Singapore  (MSS) said thundery showers are expected to continue for the rest of February.

In response to ST’s queries, a spokesman said there were thundery showers over many areas in Singapore from 3pm to 6pm on Sunday.

He said the average daily total rainfall across Singapore on Sunday was 23mm, and it was 4.6mm in Punggol.

“During the downpour, the highest wind speeds recorded across the island ranged between 20.6kmh and 57.4kmh,” he said.

“The wind station closest to the Punggol area is in Seletar, which recorded a maximum wind speed of 35.2kmh.”

In its Feb 16 advisory, MSS said prevailing winds from the north-east are forecast to strengthen, and on some days, large-scale convergence of winds over Singapore and the surrounding region may trigger widespread and heavy thundery showers.

The rainfall for February is expected to be above average for most parts of the island.