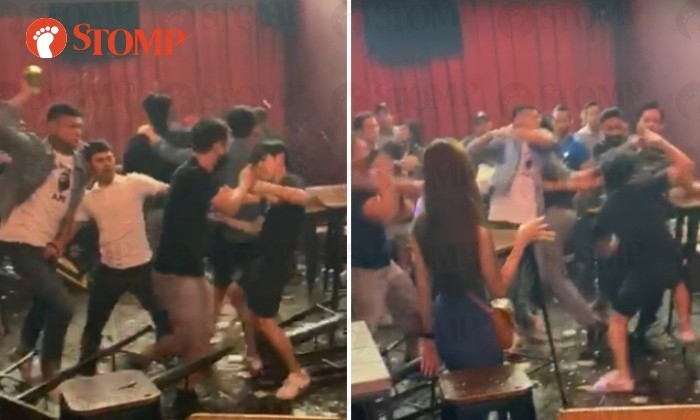 A brawl at a club in Boat Quay on Dec 13 saw about 15 people raining blows and throwing food at each other amidst a chaotic scene of overturned tables and chairs.

The police previously said in a statement on Dec 16 that eight people were arrested for their suspected involvement in a case of rioting.

In the news release, the police added that they were also looking for a man to assist with investigations regarding this case.

The police subsequently said in a statement on Dec 18 that the man has been found.

A video of the dramatic fight that was posted on Thelocalsociety's Facebook page has since garnered more than 183,000 views.

Several Stompers also caught wind of the incident, with one of the Stompers calling the fight a 'nuisance'.

In the video, a man in a white shirt and a denim jacket can be seen struggling as he is held back by his opponent.

Another two men wearing black can also be seen throwing punches at each other, before quickly moving away to join in on another brawl.

A plate of white substance, which appears to be flour, is then thrown in the air as the screaming continues in the background.

Another man in a denim shirt throws what looks like a cupcake at his opponent's head as the latter walks off.

A woman can also be seen attempting to walk towards the fight, but gets stopped by another woman in black shirt, who asks her to "get out".

The camera then pans to the floor and the video gets abruptly cut off.

According to Chinese-language newspaper Lianhe Zaobao, an eyewitness named Wu, who works at a restaurant in Boat Quay, said he saw a group of people running past the restaurant around the time that the incident occurred.

He told Shin Min Daily News that he was busy working when he heard noise coming from outside the restaurant.

When he looked up, he saw a group of men and women running past the restaurant.

He also told Shin Min Daily News that three police officers walked into the club after the incident to ask customers about what happened.

The police said in a statement that they were alerted to the fight at 12.50am where a group of eight people were allegedly attacked by a group in a club.

"The victims suffered minor injuries. One of the victims, a 40-year-old man, was conveyed to the Singapore General Hospital," added the police.

"Through investigations and with the aid of CCTV footage, officers from the Central Police Division established the identities of the assailants consisting of five men and three women, and arrested them on Dec 14."

According to the police, preliminary investigations revealed that the eight victims are unknown to the assailants and they had purportedly attacked the victims due to a dispute.