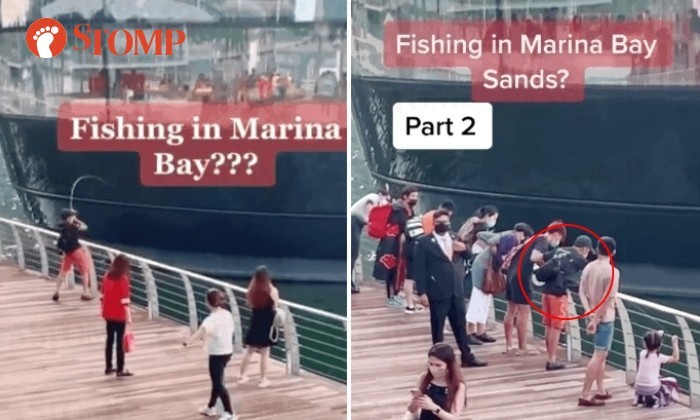 National water agency PUB is investigating an incident in which a boy was spotted fishing illegally at Marina Reservoir.

The incident was caught on video and uploaded on TikTok on Nov 28.

The video has since been deleted from the social media platform but not before catching the attention of netizens, many of whom disapproved of the boy's actions.

In the video, a boy in a black shirt and red shorts can be seen having a tug of war with his fishing pole as he struggles to pull it towards him.

In part two of the video, on-lookers gather to watch as the boy attempts to reel the line in, with the help of his friend.

A man in a black suit, who appears to be a security personnel, can be seen standing close to the boy and speaking to someone via a communication device.

He does not seem to approach or talk to the boy.

After the video made its rounds on social media, netizens shared their disapproval upon seeing the boy's actions.

On the other hand, other netizens saw no cause for concern.

In response to a Stomp query, a spokesman for PUB said: "We are aware of this incident and are investigating as the location in the TikTok video is not a designated fishing spot at Marina Reservoir."

PUB is also appealing for members of the public who have witnessed the incident and/or are aware of the identity of the individual involved to contact PUB immediately at 1800-2255-782.

"We urge anglers to be considerate and practice responsible fishing," added the PUB spokesman.

"Fishing in non-designated areas is dangerous and may pose safety risks to other pedestrians and reservoir users especially in places such as the Boardwalk that are highly frequented.

"There were incidents in the past where pedestrians were injured by stray fish hooks cast by anglers.

PUB has also shared a post on Facebook to remind the public to practice responsible fishing at reservoirs and waterways.

We have received several reports of illegal fishing activities at our reservoirs and waterways recently. Thanks to a...