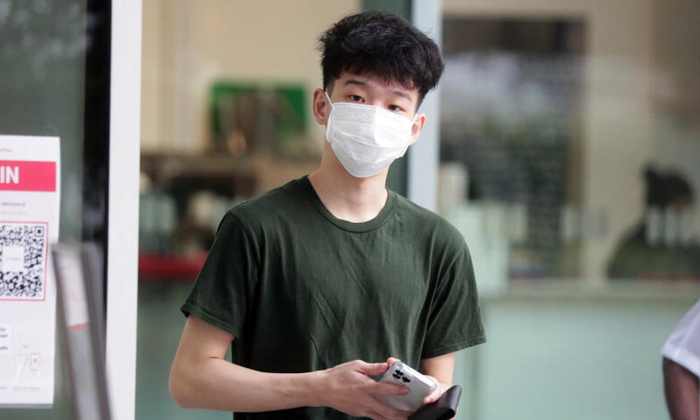 As a prank, a teenager lied about contracting Covid-19 and being hospitalised in an intensive care unit (ICU).

But Siew Hanlong's lies had serious consequences when a close contact who was serving national service (NS) at the time was later sent home from Pulau Tekong to isolate himself.

Army personnel also had to disinfect the soldier's bunk and make arrangements to isolate those who had been in contact with him. This disrupted the training schedule that day.

Siew, now 19, was on Tuesday (Dec 14) given nine months' probation after he pleaded guilty last month to two counts of communicating a false message under the Miscellaneous Offences (Public Order and Nuisance) Act.

As part of his probation, the Singaporean teenager has to remain indoors from 11pm to 6am every day and perform 40 hours of community service.

At around 1am on May 23, Siew posted an image of a positive polymerase chain reaction test that he found online on his Instagram Stories and added the caption: "Guys... I got the new covid variant bye im (gonna) die."

He also posted a photo of himself in a hospital bed, with the caption "in ICU right now farewell guys".

Siew had uploaded the post while he was at home and the photo was from his previous admission to a hospital for an unrelated incident.

He removed the two posts 15 minutes after they went up but the damage had been done.

His 19-year-old friend, who was serving NS on Pulau Tekong, woke up at around 4.45am that morning and saw his friends discussing Siew's posts in a WhatsApp group chat.

He was afraid that he might be infected with the coronavirus, as he had met Siew earlier. He tried to contact Siew to confirm the posts but did not get an answer.

Siew's friend then reported to his army superiors that he was a close contact of a Covid-19-positive case and was sent home to isolate after taking a swab test.

It was only after he arrived home at around 11.15am that Siew responded that his Instagram Stories posts were meant as a joke.

He has since apologised for his actions.

For each charge under the Miscellaneous Offences (Public Order and Nuisance) Act, an offender can be jailed for up to three years and fined up to $10,000.