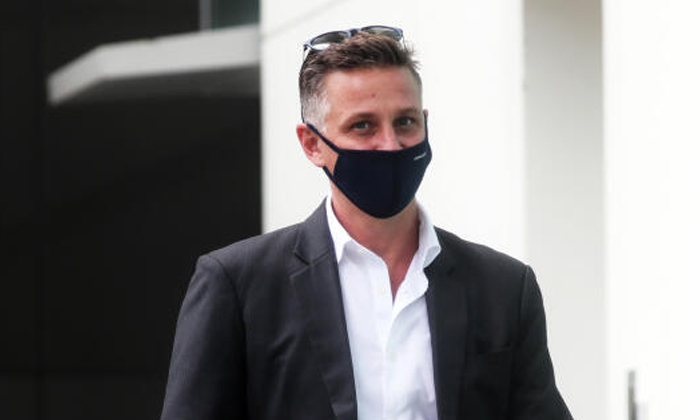 A night out drinking for a private jet pilot has earned him time behind bars after he abused police officers and caused annoyance while drunk.

Cameron Lachlan Milne, 40, climbed onto a lorry and threw equipment around, which prompted one of the workers doing cable installation works for the National Day Parade to call the police.

The Australian then tried to leave but fell into some bushes.

While falling, he grabbed a national serviceman, who was escorting the workers, and tore his shirt.

When the police arrived and put him into their car, Milne lashed out and kicked one of the officers.

On Friday (March 18), Milne was sentenced to 10 weeks' jail and a fine of $5,000 for causing hurt and using abusive words to a public servant, as well as causing annoyance to others while he was drunk.

Five other similar charges were taken into consideration for his sentencing.

The incident happened after Milne had drinks with friends in the Boat Quay area on June 14, 2018, and consumed two pints of beer.

He also later shared two bottles of vodka with his friends at a bar in Pan Pacific Singapore.

Milne left the bar in the wee hours of June 15 and was in Marina Square to buy water, when he approached a lorry near a group of workers doing cable installation works.

One of the workers saw Milne throwing their equipment around and told him to get off the lorry, but Milne, who was smelling of alcohol, stumbled around and spoke incoherently.

After the police arrived and arrested him, he kicked one of the officers while inside the police car. Milne also directed various expletives at the officer.

The officer was later found to have sustained swelling, mild tenderness, and bruising behind his left ear as a result of the assault.

Milne's lawyer, Mr Anand Nalachandran from Forte Law, told the court that his client had just returned from London and "in that jet-lagged state, made the error in judgment of consuming excessive alcohol without dinner".

"Alcohol intoxication does not excuse or justify this behaviour - but this was a wholly uncharacteristic lapse and since then, our client has sought counselling," said Mr Nalachandran in mitigation.

For causing public annoyance while intoxicated, Milne could have been fined up to $1,000, jailed for up to six months, or both.

For using abusive words to a public worker, he could have been fined up to $5,000, jailed for up to 12 months, or both.

Voluntarily causing hurt to a public servant carries a jail term of up to seven years, or a fine, or caning, or any combination of these punishments.

Milne will begin serving his sentence on March 25.

Related Stories
Unmasked man who abused cabby while drunk has resolved to give up alcohol forever
South Korean man attacked 2 S'poreans and swore at police, saying: 'I want to go to prison'
2 weeks' jail for man who 'attacked' 2 buses at Woodlands depot after 7 cans of beer
More About:
drunk
court
public nuisance
assault