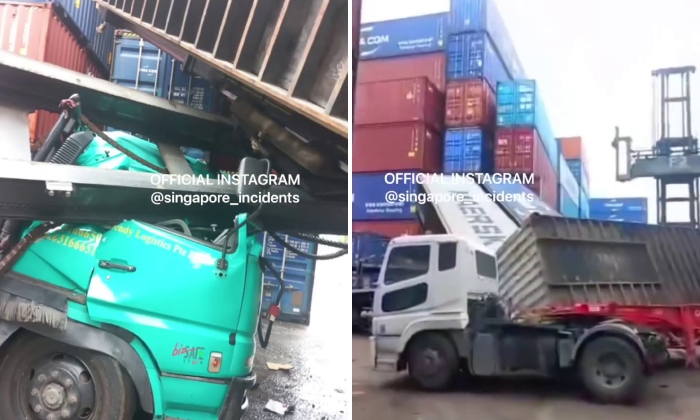 A prime mover driver jumped over to the passenger seat just as a container stacker toppled onto his vehicle at a Tuas worksite and crushed the part of the cabin where he had been seated.

The driver, an Indian national in his mid-30s, lost consciousness in the accident, which occurred at around 12.40pm last Saturday at 15A Tuas South Avenue 12.

He was pulled out of the vehicle by another driver.

A spokesman for the Ministry of Manpower (MOM) said on Tuesday that the driver had minor injuries and was taken to Ng Teng Fong General Hospital. He was given four days of medical leave.

She added that the ministry is investigating the workplace accident, in response to queries from The Straits Times.

On Sunday, a video of the incident on Facebook page Singapore Incidents showed that the driver’s cabin of the green prime mover had been crushed by the container stacker as well as several containers that had also toppled over.

The MOM spokesman said: “A container stacker was lifting two containers when it suddenly tilted, causing it to topple onto a prime mover within the same vicinity.”

A spokesman for the driver’s employer, Wendy Transport Enterprise Company, said the driver had been offloading a container when the incident occurred.

He said: “According to the statement (for the incident), when the driver saw the container stacker about to topple, he jumped to the passenger seat of the prime mover, lay there and lost consciousness.

“Another driver then pulled him out and a yard manager sent him for a medical check-up.”

The driver had joined the company in 2022 and had been working for less than six months, he added.

The MOM spokesman said the ministry has instructed the worksite’s occupier, Pacific Trans, to stop using container stackers at the premises.

This workplace accident comes amid a six-month heightened safety period that began on Sept 1, during which companies can be barred from hiring foreign workers if unsafe work conditions or poor risk controls are found after serious and fatal workplace accidents.

In particular, fatal accidents related to vehicles have been on an upward trend over the last 1½ years, said MOM in September.

In September, companies in the construction, manufacturing, marine, process, and transport and storage industries, as well as those in other industries that use heavy or industrial vehicles such as lorries and forklifts, were required to thoroughly review their safety procedures, the first time this has been made mandatory.

The clampdown on safety lapses comes amid an uptick in work-related deaths in 2022, with 40 fatalities reported as at Oct 17, outstripping the death toll of 37 for the whole of 2021.