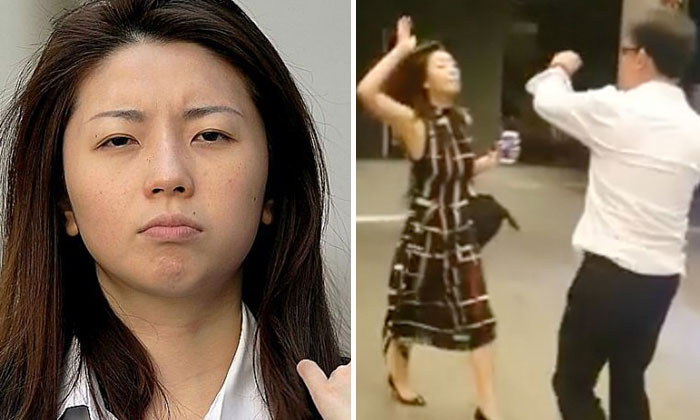 A drunk woman screamed profanities, hit and bit two people in separate scuffles after she refused to pay her taxi fare.

The incident was first reported on Dec 8, 2016, after Stomper Eyeza alerted Stomp to two viral videos of the woman’s brutal assault on a taxi driver and a female security guard.

The woman, Taiwanese broker Dina Huang Chih-Yung, 31, was sentenced to three weeks’ jail on Tuesday (Jan 2) for hitting and biting the taxi driver, Mr Cheng Teck Wei, 43, on his arm on Dec 7, 2016.

Two other charges were taken into consideration in the sentencing.

The court heard that Huang had boarded Mr Cheng’s cab at Marina Bay Sands Tower 3 on the night of the incident.

She fell asleep after boarding cab to Skysuites@Anson condominium in Enggor Street.

Reports show that she had consumed at least 700ml of sake prior to boarding the taxi.

After reaching her destination, Huang alighted and walked away without paying the fare.

This prompted Mr Cheng to dash out of his taxi and grab Huang’s bag to prevent her from leaving.

In response, Huang hit Mr Cheng’s arm and tried to kick him as she attempted to wrestle the bag away from him.

However, Mr Cheng held onto the bag.

During the process, Huang hit Mr Cheng at least four times, and screamed at him in Mandarin, asking him to let go.

Huang then walked away while hurling vulgarities at him.

She told Mr Cheng that she would wait for the police to arrive and that she ‘had a lot of money’.

A security supervisor attempted to mediate the situation and advised Huang to cool down.

However, Huang started to hit Mr Cheng on his arm once again while shouting vulgarities at him.

In the ensuing scuffle, Mr Cheng’s glasses fell and were chipped.

Huang then went into a Japanese restaurant nearby and complained to an assistant manager that her bag had been snatched from her.

The manager then accompanied her out of the restaurant, and Huang approached Mr Cheng again.

She and Mr Cheng became engaged in another scuffle.

Ms Jeiv Anay, a security officer who arrived at the scene, tried to calm Huang down, but was bitten in her left hand, and hit on her head.

Huang also hit her hand twice and hurled vulgarities at her as well.

When police officers arrived, they observed that Huang was reeking of alcohol.

She reportedly fell asleep as she squatted outside the Japanese restaurant while waiting for the officers to issue her a ‘case card’.

She also staggered while being handed the ‘case card’.

Huang’s lawyer, Mr Sunil Sudheesan, together with Ms Diana Ngiam, said that his client only reacted the way she did as Mr Cheng had taken her handbag.

He said that she had consumed alcohol due to work commitments, and she accepted responsibility for her actions, adding that she was very remorseful.

Mr Sudheesan revealed that Huang’s company was extremely sympathetic and supportive of her, and would continue to employ her.

Huang cried after receiving the sentencing.

She could have been jailed for up to two years and/or fined up to $5,000 for causing hurt.

For abusing the security guard, she faced up to six months' jail and a $5,000 fine.