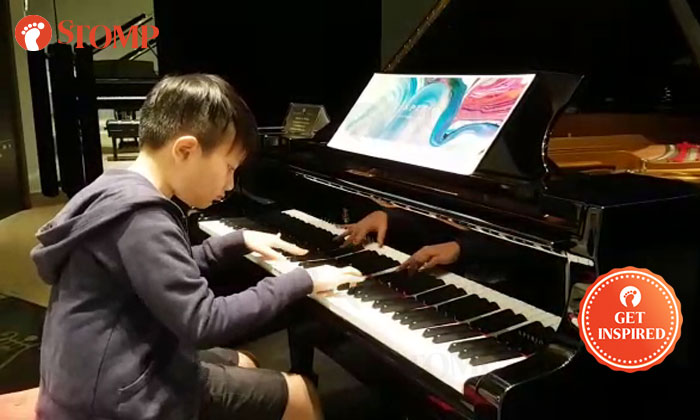 Some shoppers were mesmerised when a 10-year-old boy took to the piano at ION Orchard on Saturday (Dec 17).

Stomper Davy, his wife and his son Lucas were walking around the mall when the passed by Steinway piano placed outside a music store for public use.

Lucas, who has a natural affinity to music, decided to play some Chopin.

His parents took a video of his son playing Fantaisie-Impromptu on the piano completely by ear.

After he was done, he gave a small bow to the applause of a small group of people who had gathered to listen to him play.

Davy told Stomp in a phone interview that Lucas has always shown an interest in music.

"He was born with perfect pitch and even since young, he displayed these small tendencies," David said.

"He would be able to identify notes just from hearing them."

Neither Davy nor his wife knows how to play any instrument so they enrolled Lucas in music classes when he was five years old.

"He managed to pick up the piano very fast," he said.

Lucas already has a Grade 6 certificate and is now learning Grade 8. It usually takes people six to eight years to get to this point.

"I hope that he is sure of what he wants to do so he can pursue music as a career," said Davy.

"Whatever it is, we will try to support him."