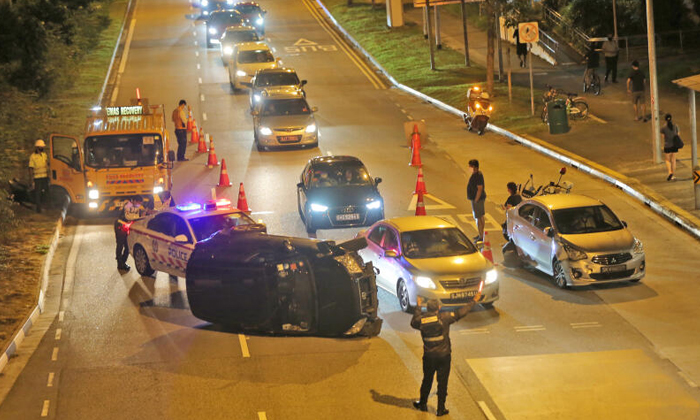 A pregnant woman was one of two people taken to hospital after a four-vehicle accident in which a black Toyota flipped on its side.

The police and Singapore Civil Defence Force were alerted at about 7.40pm on Sunday to the incident involving three cars and a taxi at Punggol East Road towards Punggol Drive, near Riviera LRT station.

The Toyota driver, a 64-year-old man, was conscious when taken to Sengkang General Hospital.

The pregnant woman, 33, who was in a grey Mitsubishi driven by her husband, was also conscious when taken to KK Women's and Children's Hospital.

Investigations are ongoing, the police said.

The cabby, who wanted to be known only as Mr Tiah, 60, told Lianhe Wanbao that he was driving on the right lane of the three-lane road when he and the Mitsubishi behind him stopped to let a bus switch lanes.

The Toyota then crashed into the Mitsubishi, which in turn hit his taxi. Mr Tiah said he saw the Toyota flip and hit a fourth car as it landed on its side.

Passers-by helped the driver out of the Toyota.

The accident, which blocked two of the three lanes, caused a two-hour jam. The damaged Toyota was towed away only at about 9.30pm.

The Toyota driver's son, 34, told Shin Min Daily News that his father, who lives nearby, was on his way to buy dinner at the time.

He said his father, who had been accident-free in 20 years of driving, suffered bruises and was discharged yesterday.

Newly-elected Member of Parliament for Pasir Ris-Punggol GRC Yeo Wan Ling had just finished a block visit when she was alerted to the accident.

"I dropped everything and went over. From the alert I read, it sounded bad," she said.

Ms Yeo said she was relieved there were no serious injuries, and she and her team are in touch with some of the victims and will render assistance if needed.