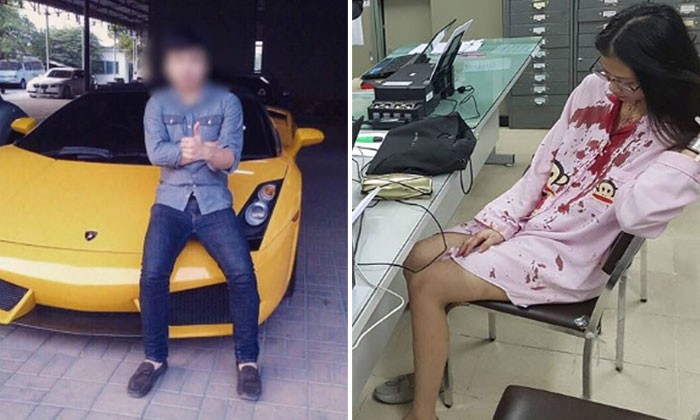 Thai netizens are expressing outrage after a 'high-society' guy allegedly bashed his pregnant girlfriend till her face was bloodied last Saturday (July 22).

Ms Yodwadee Junsupong, 23, who suffered cuts and bruises on her face and limbs, is said to have gotten into a fight with her boyfriend - infamously known as the 'Porsche Man'-  after she caught him chatting with other women on the Line chat app, said the police.

Photos of a handphone and a tablet, both damaged and stained with blood, were seen on TV and social media following the melee in Bangkok.

What makes the incident more interesting is that it has some of the key ingredients of a gripping Thai TV drama as it unfolds.

Media reports quoting the police and a relative of the victim revealed that the suspect is a well-connected man, who was in media limelight for two widely reported car accidents.

Well-known for his flashy lifestyle, he was involved in an accident that injured a pedestrian and biker when he was driving a white Porsche in April this year. He was also a suspect when three people were injured in a hit-and-run while he was driving his grandmother's Mini Cooper in 2012, when he was only 17.

Incensed by how Yodwadee was beaten till her face was dripping with blood, her brother Shane Rajatabhaiboon put up graphic photos of her injuries on Facebook on Sunday (July 23), taken while she was making a report at a police station. His post has since garnered 37,000 reactions including that of anger and sadness and has been shared 28,000 times.

He told Daily News that his sister called him while she was being attacked and he told her to get out of the place and rush to the police station.

Shane was upset that the suspect still assaulted his sister when he knew she was pregnant with his child. Shane said the man, who was into a seven-month relationship with Yodwadee, also smashed her tablet and phone. He claimed that she was beaten up by him a number of times, but this was the worst attack.

Yodwadee, who is apparently into her second month of pregnancy, was swarmed by reporters after she gave a fuller report to the police on Monday after her medical follow-up. Apparently, she did not suffer a miscarriage during the attack.

The police said the suspect had contacted them, insisting that the fight was a private matter "between boyfriend and girlfriend", according to Amarin TV, which had splashed pictures of a man with fancy cars.

While the drama develops with the police still investigating the case, social media attention has now turned towards Shane, who has been urging his sister to sue him.

Shane, who looks like he is in his 20s, has been praised for his 'celebrity' good looks. On his Facebook page, which is followed by over 5,200 people, Shane states that he's from Bangkok but is now living in Myanmar.

Looking dapper in a black jacket and jeans with his sister and an unidentified man in photos posted last night (July 25), Shane was praised by several Facebook followers as "handsome".

One Facebook user proclaimed Shane "the new movie hero", while another wanted his autograph.

He has been a supporting sibling to his injured sister since the incident, giving interviews and appearing alongside her in a talkshow. He said in his Facebook post that he will "go all out to prosecute" the suspect.