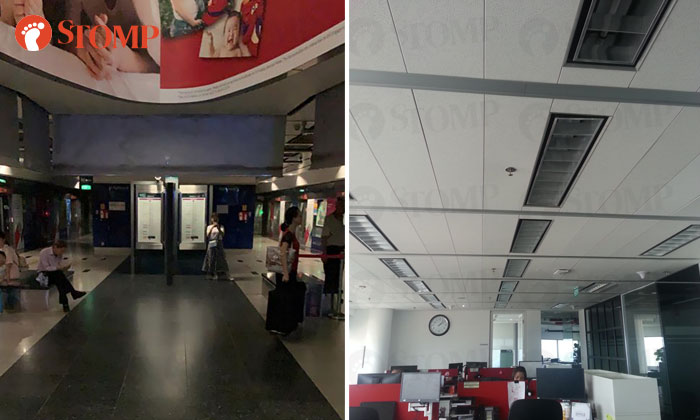 The equipment failure also caused an electricity flashover, resulting in a fire at the hotel which was put out by Singapore Civil Defence Force officers.

At 1.29pm, Stomper Irene shared a photo of a dimly lit MRT station and informed Stomp that the blackout had affected stations from HarbourFront to Dhoby Ghaut.

Stomper Loh shared a video on Facebook of commuters walking in the dark along the walkway connecting the East-West and North-East lines at Outram Park MRT Station.

The power outage was due to a dip in the power grid network and emergency lights were turned on during the outage.

"Train services were not affected by the power outage," SBS Transit said.

However, other services such as the lifts and escalators were affected and not working.

Train operator SMRT said that Dhoby Ghaut and City Hall MRT stations were briefly affected by the power outage. One escalator at each station was down, but train services were not affected.

Stomper Rizal shared a photo at his Beach Road office that had also been affected by the power failure at about 2.10pm.

SP Group apologised for the outage and said power supply was fully restored within 12 minutes to all areas except Carlton Hotel.

It later was able to fully restore electricity supply to the hotel at 6.34pm.

"This incident has occurred despite the equipment being inspected on 1 February 2019," it said.

"Taken together with the incident at the Bright Hill substation on 26 January, we will conduct a thorough investigation of both incidents."