Power outage at Plaza Singapura: Management will provide assistance to tenants where required 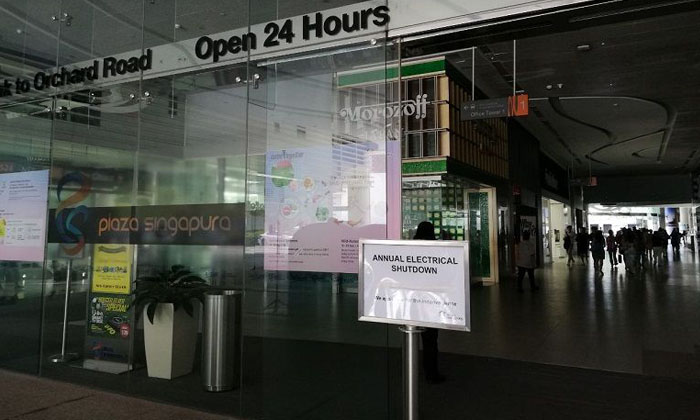 The extension wing of Plaza Singapura faced a power outage on Sunday (Sep 23) due to an unforeseen delay in restoring back power after a scheduled power shutdown at 10pm the night before.

A Stomper, who is a Business Development Manager of two restaurants in Plaza Singapura, told Stomp that she was informed by her staff of the power outage at the extension wing of the mall when they arrived to work at 10am that Sunday.

She said that business could not run as per usual because the restaurant's exhaust could not work.

"We had to wait for the exhaust to start working and the lights to come back on. We only could start cooking properly in the late afternoon."

According to The Straits Times, this was due to an unforeseen delay in getting the power back up from the night before, where there was a scheduled power shutdown at 10pm on Saturday.​

The power was supposed to come back by 8am the next day, however, it only returned gradually from about 2.15pm.

The lights were fully back on by 2.40pm, while the air-conditioning was switched on progressively from 6.40pm and was fully restored at 8.30pm.

Eighty tenants were affected by the blackout, most were unable to continue with business until later in the day.

The Stomper added that: "Tenants were on standby for the entire day, with no exact projections on when everything can resume its normal operations."

Another concern raised by the Stomper was that: "Tenants can expect a massive loss in sales as it is Sunday the busiest day of the week. Tenants also have to pay staff salaries, food spoilage from the non functioning freezers and chillers."

She also shares with us that she does not know if she will receive compensation for the business loss incurred.

Ms June Ang, General Manager of Plaza Singapura said: "Throughout Sunday, we provided regular updates to our tenants and offered support to those who continued operations. We are continuing to provide assistance to our tenants where required, and remain available for discussions."