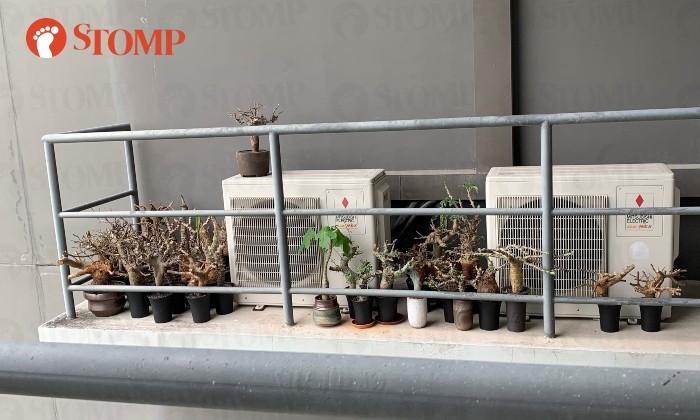 A number of potted plants on an aircon ledge at an Housing Development Board (HDB) building in Clementi have been cleared after a resident raised concerns over killer litter and mosquito breeding.

Stomper Tramell told Stomp on Sunday (July 12) that he was concerned about the increasing number of potted plants placed on his neighbour's ledge at the Trivelis HDB along Block 311A Clementi Avenue 4.

"These plants have been placed on the ledge since May 2020 and have not been removed despite repeated calls in July to Holland-Bukit Panjang Town Council," the Stomper said.

He raised the questions on whether these potted plants could potentially be a breeding ground for mosquitoes, especially since the National Environmental Agency (NEA) has classified the area under a yellow alert level.

According to the NEA website, an area that has been classified under the yellow alert level is deemed as a high-risk area with less than 10 dengue cases.

"It could also be a cause for killer litter should the plants topple onto the ground," the Stomper said.

In response to a Stomp query, Holland-Bukit Panjang Town Council said in a statement that as of Tuesday afternoon (July 14), the potted plants on the aircon ledge have been cleared.